So this Banana Pudding Cheesecake was only the third baked cheesecake that I ever shared on this site and that was back in 2014. It was the first cheesecake that I spent a bunch of time testing and learned so much about cheesecakes. That’s a big statement considering the number of cheesecake recipes I have now. They are one of my favorite things to make! I guess you could say that this cheesecake was the beginning of my love for making and testing fun new cheesecakes.

Given that it was posted almost 6 years ago exactly, I thought it was time to give it a facelift and a little extra love. If you love banana pudding, you will LOVE this cheesecake! It’s full of legit banana pudding flavor. There’s lots of banana – both in the filling as the “pudding” and as sliced bananas on top, and plenty of vanilla wafers – both in the crust and on top. You’re definitely going to want to try it.

As far as changes to the recipe, I didn’t really change much. It was pretty darn good from the beginning. I did decide to add a little sour cream to the filling. I’m a big fan of some sour cream in cheesecakes. It adds to a more creamy texture and and nice flavor. And then I increased the amount of crust. I love a good, solid crust.

How to make Banana Pudding Cheesecake

To get started with this cheesecake, you’ll make the crust. Since vanilla wafer cookies are key to banana pudding, they make up the crust. Combine some cookie crumbs with a little sugar and melted butter, then press them into your springform pan.

The filling is fairly straightforward. Combine your cream cheese with the sugar, flour and dry banana pudding mix. It will be a sticky mixture that’s a little thick, but that’s ok. It’ll work itself out as you go.

Next, add the sour cream. It starts to break up the sticky filling a little bit. Then add the eggs one at a time.

Keep in mind that when mixing ingredients together for a cheesecake filling, you want to mix on LOW speed. A higher speed will incorporate more air into the mixture and can lead to air bubbles, which can lead to cracks. Be patient and use low speed.

Finally, you’ll add in the vanilla extract and mashed bananas. Pour the filling into your crust and then get your water bath ready. 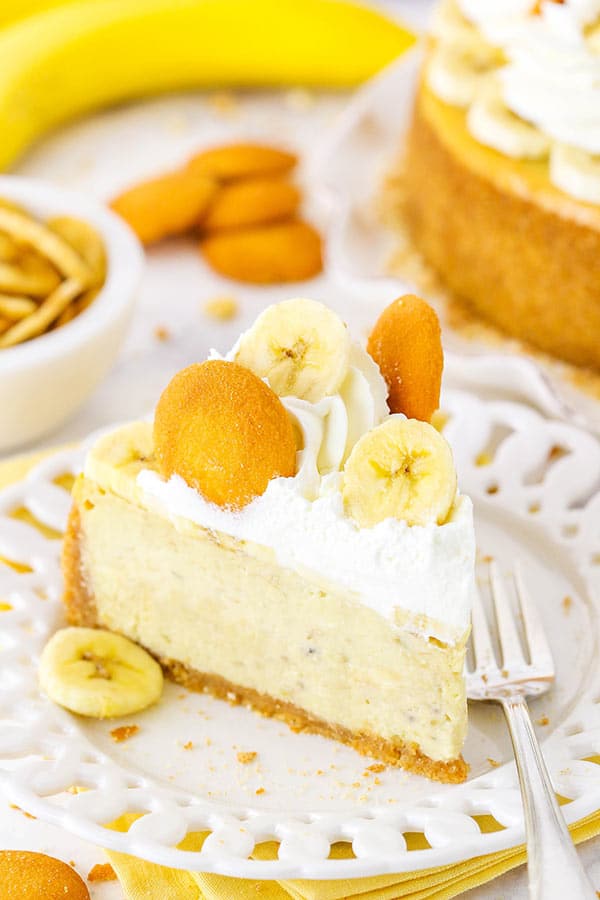 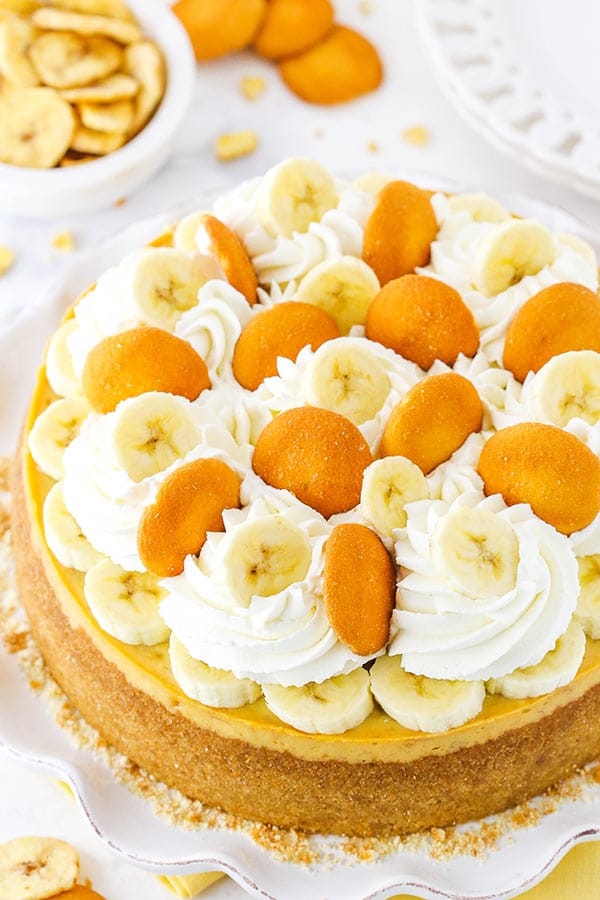 How to Use a Cheesecake Water Bath

I know most aren’t big fans of a water bath. They add some extra steps and seem like a pain. But they really do make a difference in how a cheesecake turns out. If you were to bake this one without it, it would brown more around the edges, likely crack and fall a good bit in the center when it cools. You work so hard on a cheesecake, don’t miss out on a beautiful result by not taking the few extra steps. If you need a little help with setting up your water bath, or often have trouble with leaking, check out how I set my springform pans up for a water bath for some tips and tricks.

When baking the cheesecake, you’ll first bake it for about an hour and a half. You’re looking for edges of the cheesecake to be set and the inner couple inches to be somewhat set, but still a little jiggly.

Because of the eggs in a cheesecake filling, it’s similar to a custard. Therefore, you don’t want to over bake it and end up with cracks. So, you bake it until it’s mostly baked, then turn off the oven but keep it closed for another 30 minutes. The residual heat continues to finish cooking the cheesecake while also beginning to slowly cool it. It ends up cooked, but not over baked.

The final step is to continue the slow cooling process by cracking the oven door and letting it cool for another 30 minutes. After that, refrigerate until cool and firm, then add the whipped cream and some fresh bananas and vanilla wafers.

A Must Try Banana Dessert!

The final cheesecake is thick, creamy and full of flavor! I’m a big lover of banana flavored anything and this is definitely a favorite. In fact, my husband’s co-workers got to eat the remainder of this cheesecake and deemed it one of my best!

If you are looking for an awesome banana dessert, this is it! And for more great tips on baking cheesecake, check out my post on how to make a perfect cheesecake. 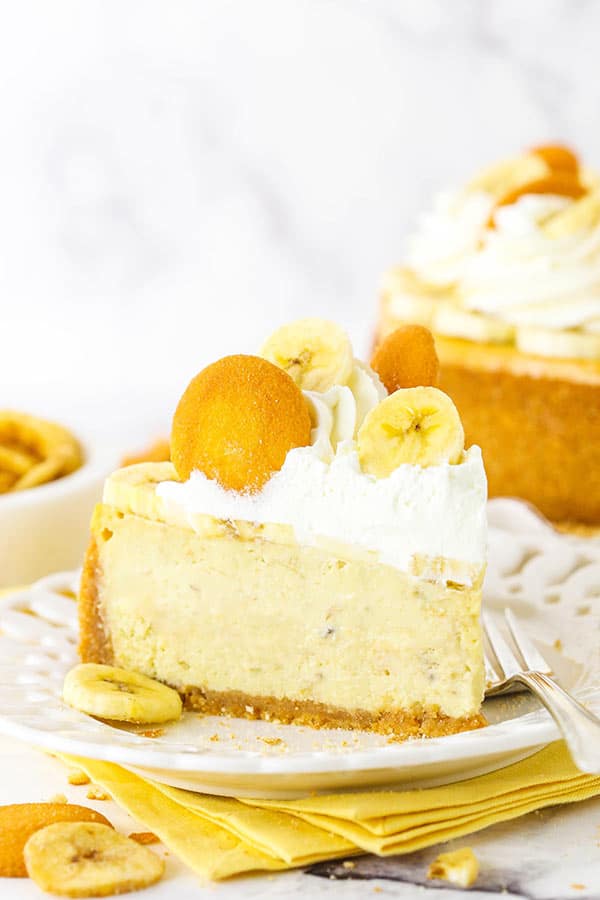 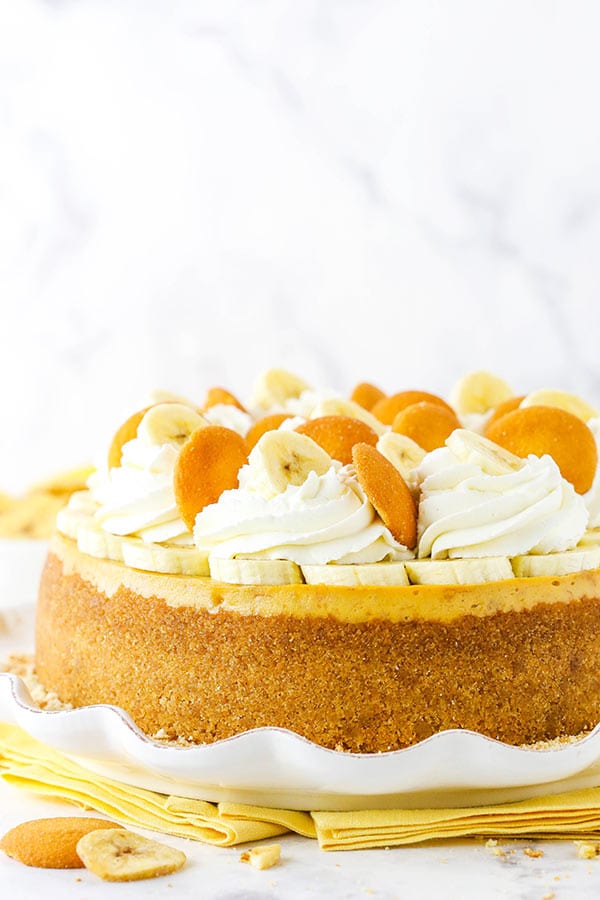