Yep, you read that right! We are officially expecting identical twins!

If you’ve been following the Lifestyle section of the blog over the last several months, then you already know about your IVF journey. We’ve been trying for 5 years to start a family and finally we can announce that we are expecting! 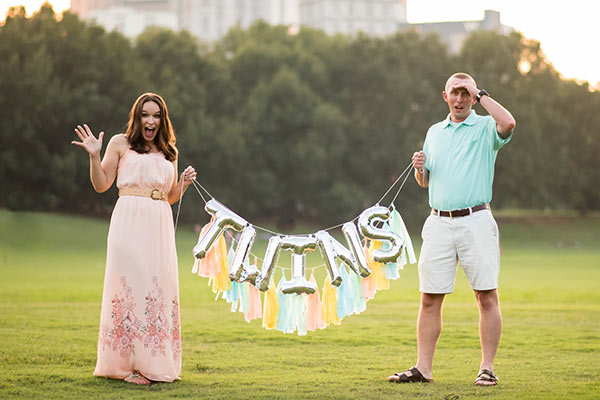 Photos by Hayley Jo Photography. Get the balloon here.

In my post last week, IVF: The Pregnancy Tests, I talked about the pregnancy tests (because there are several with IVF) and left off just before the first ultrasound. So let’s pick it up there today, because as I mentioned last week, it’s been a little nutty around here.

So we went into our first ultrasound knowing I was pregnant and just hoping to get to see a little heartbeat. We know that’s the first hurdle with any pregnancy, so I was dying to see one. As the doctor began the ultrasound, we were able to see the baby. A teeny tiny little baby, but there it was – and it’s heartbeat! Yay!

So the doctor is taking some measurements and we’re all happy and watching things and the next thing you know she says, “Oh! There’s another one!”

Now keep in mind that we transferred just one embryo. We were very intentional in that decision. In fact, just a couple days before this ultrasound, the hubs and I were walking Jessie and he said to me, “Could you imagine if it was twins?”

Clearly the joke was on me! And crazily enough, I found it hilarious. 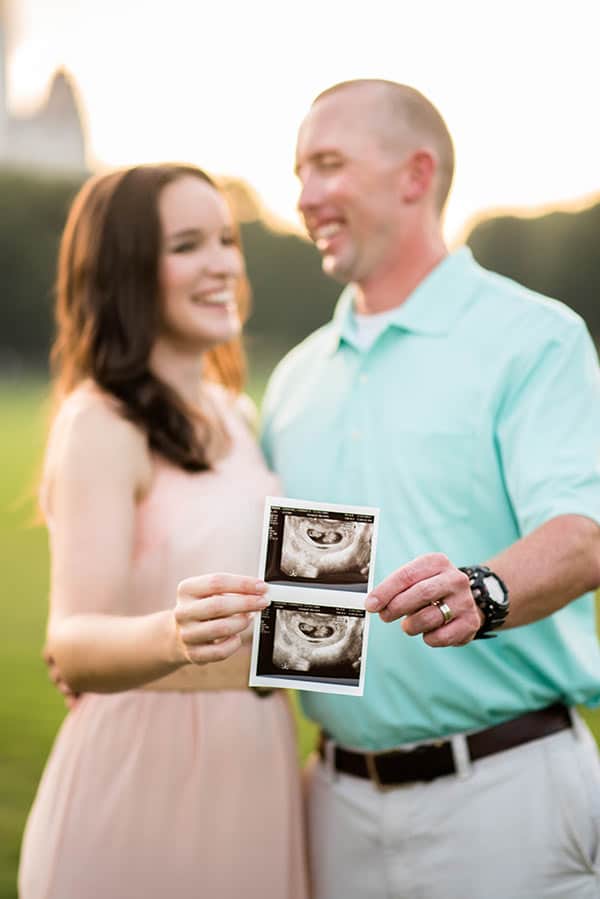 When the doctor said there were two babies, it’s hard to even describe what went through my head. Total shock. Like, are you sure??? And once I realized it was not a joke, I just started laughing. Uncontrollably. The irony and the shock were too much. I think I might have momentarily lost my mind a bit.

The doctor kept doing her thing while I was laughing and eventually had to ask me to stop laughing because she couldn’t get accurate measurements. At that point, I had to look away from the monitor because every time I saw two of them on there, I just couldn’t stop laughing. I couldn’t believe it! 🙂

Eventually she let us know that both heartbeats were visible on the monitor at the same time so that I could look. Again, when I saw them both, I just started laughing all over again. I had totally imagined crying when I saw a heartbeat for the first time. This laughing stuff was out of control and had to have been the shock.

So once the doctor was done and I sat up, she proceeded to tell us that she believed the babies were in one amniotic sac and may or may not share a placenta. It would be a high risk pregnancy that could include hospitalization at some point. I’d need to find a high risk OB.

Honestly, none of that sunk it at that moment. I already knew twins were high risk. I knew nothing about amniotic sacs and placentas and what it all meant. I just knew it was twins and my mind couldn’t process anything else. Honestly, I was still holding back laughter. 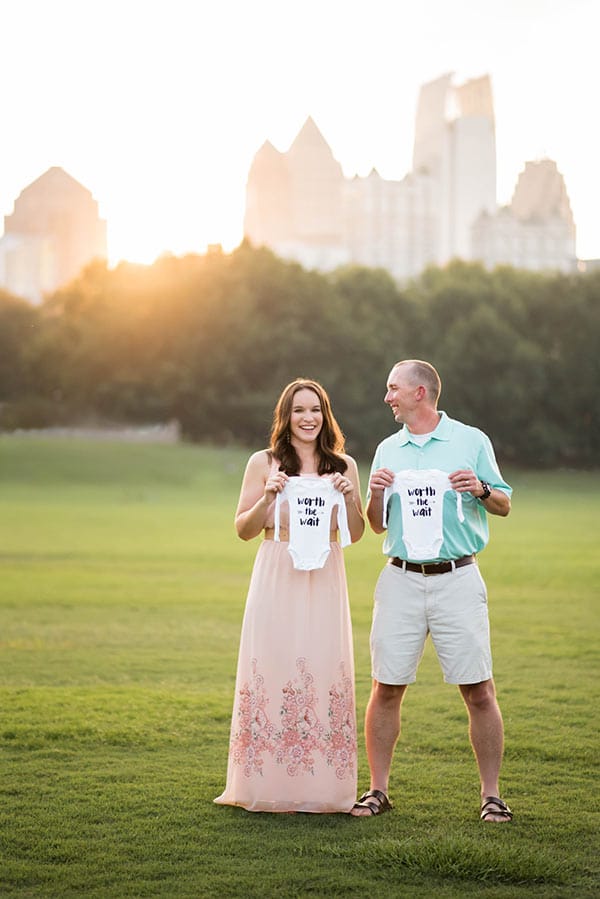 Photos by Hayley Jo Photography. Get the onesies here.

When the doctor left the room, the nurse talked to us a little more and made a recommendation on a doctor’s office and suggested we schedule an appointment ASAP because we’d want to meet with the high risk OB. It all still wasn’t sinking in.

The whole rest of the day, we called friends and family and told them the news – that we were having twins. We got lots of “Oh my gosh, oh my gosh, oh my gosh” and even some laughter, which naturally I related to. 🙂 I sat on the couch most of the day totally in shock. I think it hit me so hard because I truly had not even let the possibility of twins enter my mind.

Eventually we called my mom again and while chatting with her, the hubs mentioned that he’d looked up what the doctor was telling us about amniotic sacs and placentas. Apparently the situation we were looking at was called Mono-Mono twins, otherwise known as “MoMo Twins.”

I heard him, but still couldn’t process much. I was very much like, ok, yea. That’s cool.

As the shock started to wear off, I googled. Turns out twins normally have their own amniotic sac and placenta, called Di-Di. In rare cases, you’ll have Mono-Di twins that share a placenta, but have their own amniotic sacs. In even more rare cases (apparently less than 1% of identical twins), you’ll have Mono-Mono twins, which share both an amniotic sac and placenta. Not only is it the most rare situation, it’s also the most high risk and there’s very little information about it to be found online. 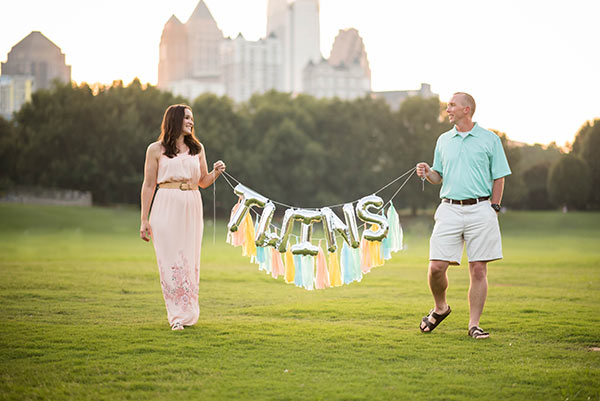 What I did find was that because of the sharing of the amniotic sac and placenta, the twins are at risk of two things. The first is twin-to-twin transfusion syndrome, where one twin basically gets more nutrition, blood supply, etc than the other. It can result in one baby growing better than the other and can even result in the death of one baby. The other risk, which is actually the greater concern, is umbilical cord entanglement. Because they are in the same sac, as they begin to move around, their cords will wrap around one another. While it isn’t always an issue, it can create a situation where blood supply, etc, gets cut off and again, can result in death.

It took several weeks and various doctors appointments before I really understood what it all meant and how it meant this pregnancy would play out. Plus, I wanted to hear from my doctor, not the internet.

I was able to get an appointment with my high risk OB a couple weeks later. Because of our unique situation, we “graduated” from our IVF clinic more quickly than usual, at 7 weeks. Once I started seeing my OB, answers started rolling in.

Here’s the gist. Because of the high risk situation, once I hit 24 weeks (I’m at 12 weeks on Sunday, so 24 weeks will be mid-November), I will become an inpatient at the hospital. They will monitor the babies several times a day to make sure heartbeats are ok. If at some point the cord entanglement creates an issue with one or both heartbeats, they will do an emergency c-section. So once I go into the hospital at 24 weeks, the babies could be born at any time, depending on how things go. If all goes smoothly and there’s no issues from entanglement, we could go all the way to 32-34 weeks before delivering the babies. They wouldn’t be allowed to go any further than 34 weeks. The risk becomes too high.

So. I’m going into the hospital in November and will hopefully be there for about 2 1/2 months. The intention is to prevent complications before they become an issue. Once the babies are born (they will be preemies for sure, it’s just a matter of how preemie), they will spend some time in the NICU. Again, the amount of time depends on when they make their appearance. 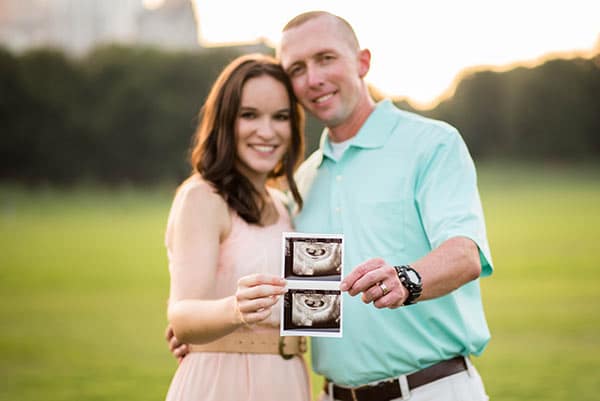 To say this information has all been a little overwhelming is a bit of an understatement. It’s A LOT to take in. I am trying to prepare myself for not being able to be in the kitchen for an extended period of time, as I’ll be hospitalized and then I’ll have babies in the NICU. The preparation for basically being “away from the office” is overwhelming and something I have to take day by day. This blog is my full time job and it’s an important part of our household income.

Plus, we will basically have the next 3 months to prepare ourselves and our home for bringing home two babies. SO MUCH TO DO! I am normally such a planner and enjoy the process of things. This is all going to be a challenge, but again – day by day.

On the plus side though, my doctor is awesome! Despite this being an unusual pregnancy and very high risk, he’s actually delivered two sets of these kind of twins in just the last 4 years, which is awesome. He knows all about them and seems super prepared to handle it, which makes me feel better and more confident.

So if you’ve noticed changes around the blog lately – like posting less often per week and slower response time with comments and emails – it’s because there’s SO MUCH TO DO! I literally never have enough time each day to do all the things I want to get done. And I’m so tired and haven’t really felt all that well. Food and I aren’t exactly besties right now and sleep constantly alludes me. So I’m doing my best, but bear with me if I seem out of sorts. I am! 🙂

All that said, aside from the craziness of it all and how overwhelming it can seem, we are truly SO excited! All of this news was a shock, but now that the shock has worn off, we couldn’t be more thrilled to welcome TWO babies! We already love them so much and can’t wait to meet then whenever they decide to join us. We are so incredibly thankful for these babies. We had no idea was God had in store for us all this time, and still don’t entirely know what to expect, but we are so thankful and can’t wait to see it all play out. These babies are a huge blessing and we can’t wait to be their parents.

So definitely stay tuned! This journey is just beginning! 🙂 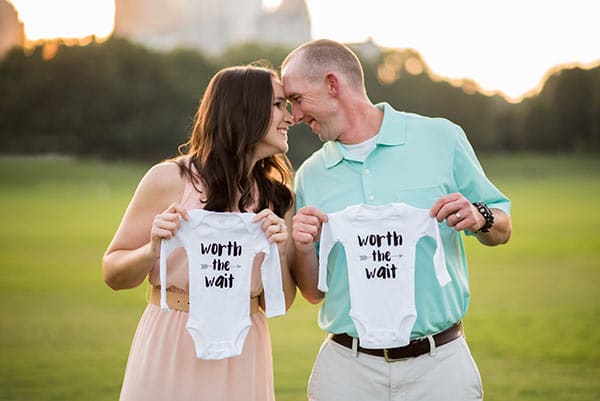