This Tiramisu Cheesecake is a super easy, no-bake cheesecake recipe that tastes just like tiramisu! The combination of espresso, Kahlua and mascarpone cheese is to die for! 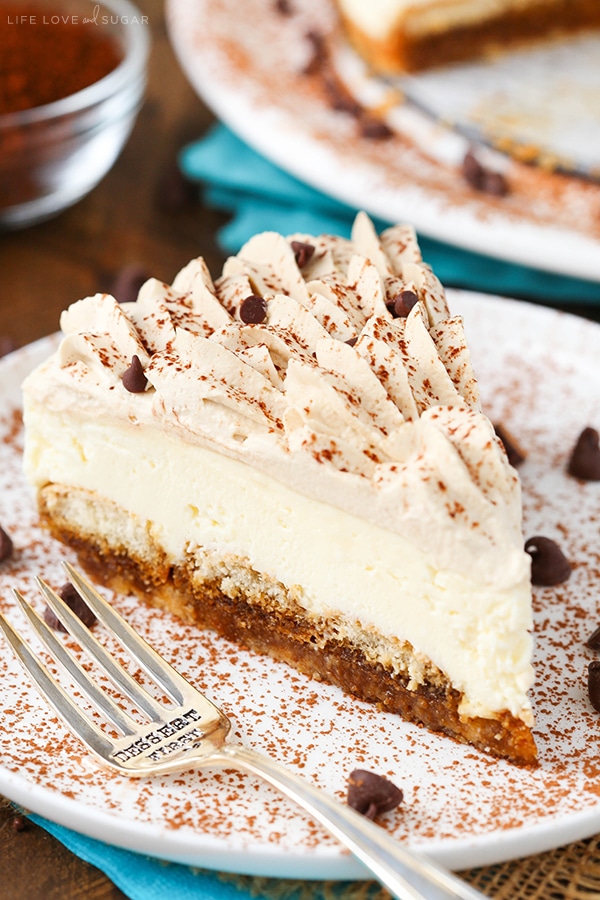 An Italian Twist on Classic Cheesecake

So you may or may not have noticed that I love my tiramisu. I have a recipe for traditional tiramisu, tiramisu cupcakes, a brookie tiramisu, a pumpkin tiramisu layer cake and now this cheesecake. I even have a tiramisu related recipe in the cookbook! I fully intend to tiramisu all the things. It’s just so good!

And I had a lot of fun putting this cheesecake together. Initially, I wanted it to be a fully baked cheesecake but it wasn’t turning out quite like I wanted so I switched gears and went with this almost no bake version. The small amount of baking comes in the form of the crust and while I would normally say that you could forgo the baking I really do think it’s necessary in this case. 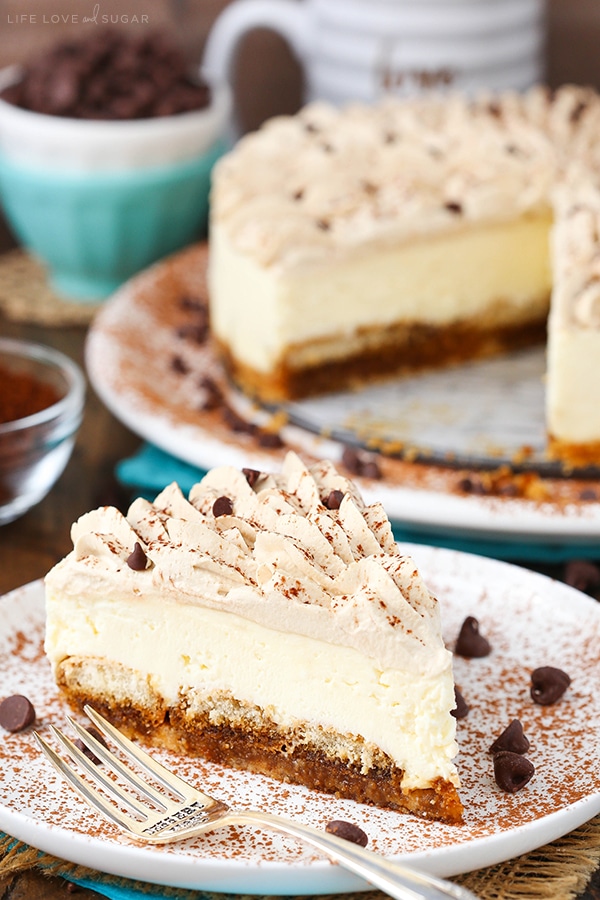 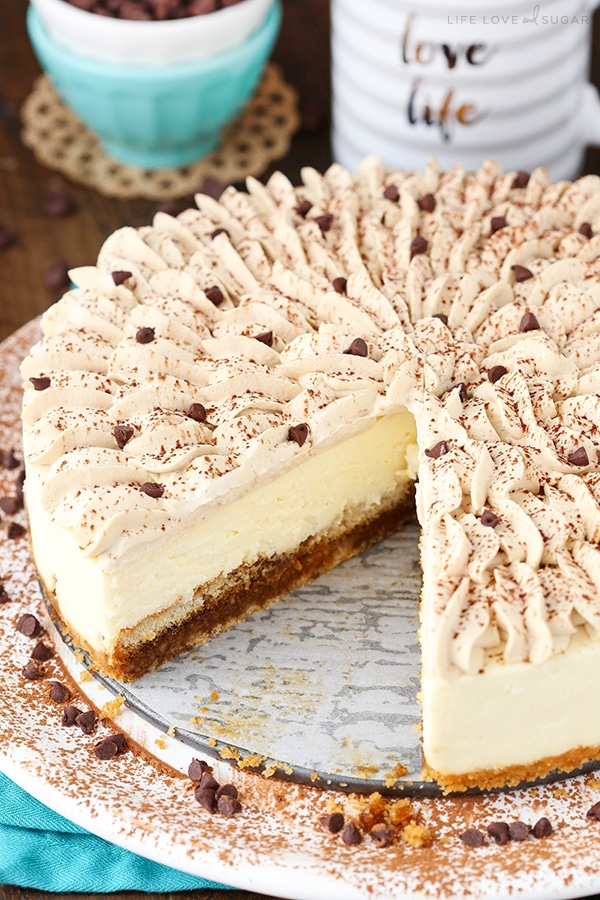 How to Make Tiramisu Cheesecake

This gorgeous tiramisu dessert only takes a few steps to make. Here’s how to do it:

Initially I made the crust with crushed up ladyfingers. It makes sense, right? But when you grind up ladyfingers they are quite soft and very light. I didn’t feel like it resulted in the firmer crust I wanted.

So instead I went with vanilla wafer cookies. The flavor is still great (one of my favorite crusts) and it did bake into a nicer crust. And as I said, the baking really is necessary. Baking a crust helps it hold together better when you cut into it later and for this cheesecake I really recommend it. The crust is topped with ladyfingers that are dipped in Kahlúa and espresso and some of the liquid soaks into the crust while firming up in the fridge. It softens the crust a bit so if you don’t bake it to begin with it’ll be even softer. 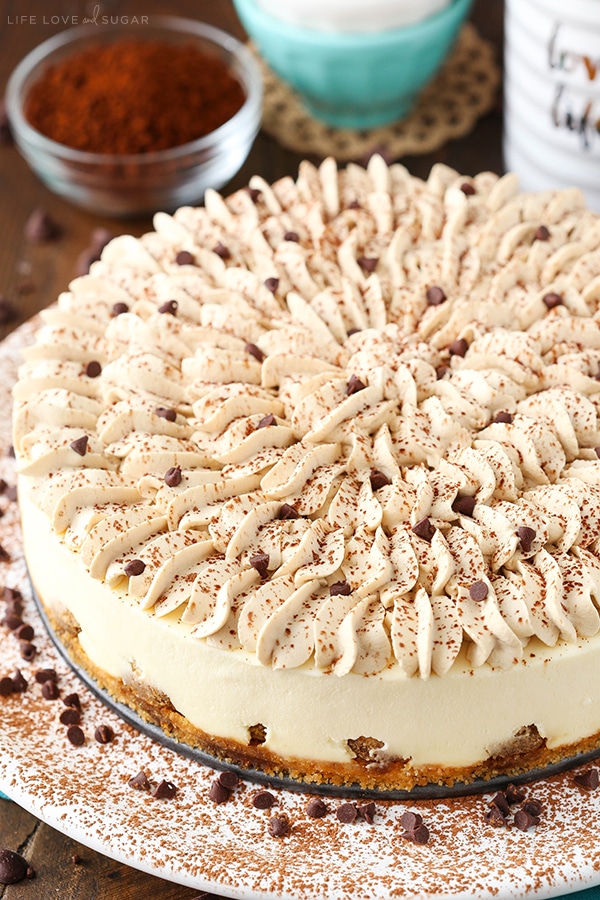 On top of the the crust, you have the ladyfingers which are dipped in espresso and Kahlúa. If you would prefer this cheesecake to be non-alcoholic you could leave out the Kahlúa and add additional water and espresso, but I always love the flavor of the Kahlúa. 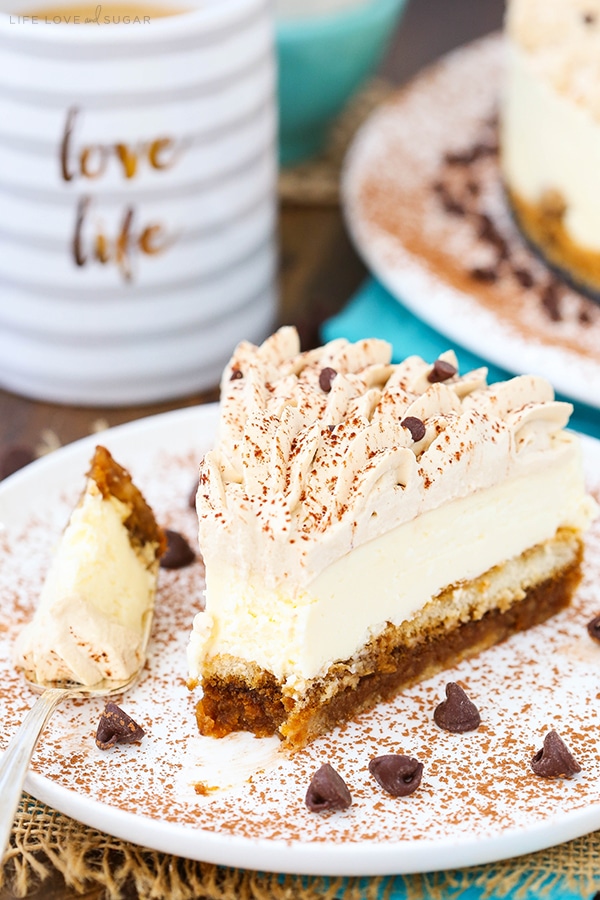 Next is the mascarpone and cream cheese filling. I used a mixture of both cheeses to help with the firmness and texture of the cheesecake. Mascarpone has a tendency to be a little softer so the cream cheese helps balance it out and keep it a little firmer and less fussy. It still has that signature mascarpone flavor that I totally love though! 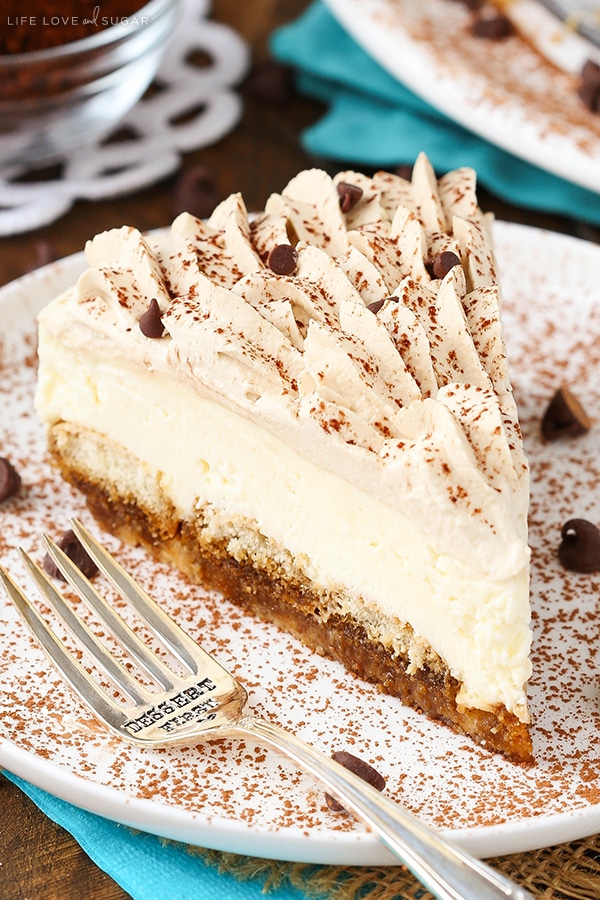 To finish off the cheesecake, I used a Kahlúa and espresso whipped cream. I used what was left of the Kahlúa mixture that I dipped the ladyfingers into, but if you don’t have any left you can make a little more. The whipped cream is piped onto the cheesecake using the Ateco 808 piping tip. Starting from the outside, you pipe shells in several full circles all the way around the cheesecake and in to the center. A sprinkle of cocoa powder finishes it off perfectly!

The hardest part of making this cheesecake is waiting for it to firm up! I couldn’t wait to dig in and it definitely didn’t disappoint. All my tiramisu dreams came true in the form of this cheesecake! So good! 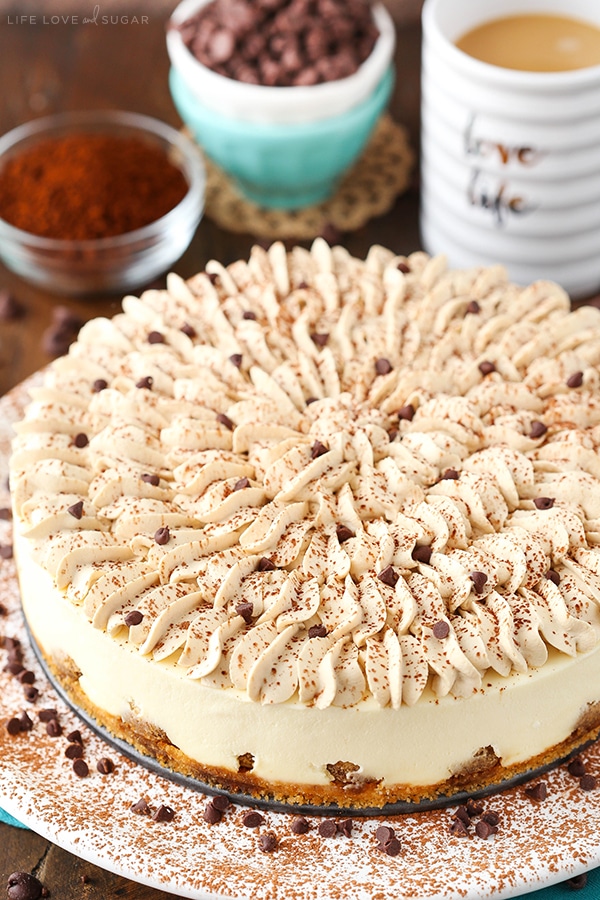 This Tiramisu Cheesecake is a super easy no-bake recipe and tastes just like tiramisu cake! The combination of espresso, Kahlua and mascarpone cheese is to die for!

1. Preheat oven to 325°F (163°C). Line a 9-inch springform pan with parchment paper in the bottom and grease the sides.
2. Mix together the crust ingredients until well combined and press the mixture into the bottom of the springform pan.
3. Bake the crust for 10 minutes, then set aside to cool.

1. To make the filling, mix the cream cheese, mascarpone cheese and sugar together on medium-low speed until combined. Do not mix on high speed or overmix or the mascarpone cheese can begin to separate. Set aside.
2. In another mixing bowl, add the heavy whipping cream, powdered sugar and vanilla extract. Whip on high speed until stiff peaks form.
3. Slowly fold the whipped cream into the mascarpone cheese mixture. Set aside.
4. Combine the warm water and espresso powder for the Kahlua mixture in a small bowl. Add the Kahlua and stir to combine.
5. Dip the ladyfingers into the Kahlua mixture one at a time, then add to the springform pan, on top of the crust.
6. Spread the mascarpone cheese mixture evenly over the ladyfingers.
7. Set the cheesecake in the refrigerator to chill and firm, 5-6 hours or overnight. Set remaining Kahlua mixture in the fridge for later.
8. When the cheesecake is firm, make the Kahlua whipped cream. Add the heavy whipping cream, 1/4 cup of the remaining Kahlua mixture and powdered sugar to a large mixer bowl. Whip on high speed until stiff peaks form.
9. Carefully remove the cheesecake from the springform pan and use an offset spatula to smooth the sides, if needed.
10. Add the Kahlua whipped cream to the top of the cheesecake. You can simply spread it on top or pipe it in a similar pattern as I did. I used the Ateco 844 tip.
11. Sprinkle a little cocoa over the top of the cheesecake, if desired.
12. Refrigerate the cheesecake until ready to serve.

* For a non-alcoholic espresso mixture to replace the Kahlua mixture, replace with this: