These Baileys Fudge Brownies are so dangerously good! Melt-in-your-mouth Baileys brownie on the bottom, Baileys fudge in the middle and chocolate on top. You’re Welcome! 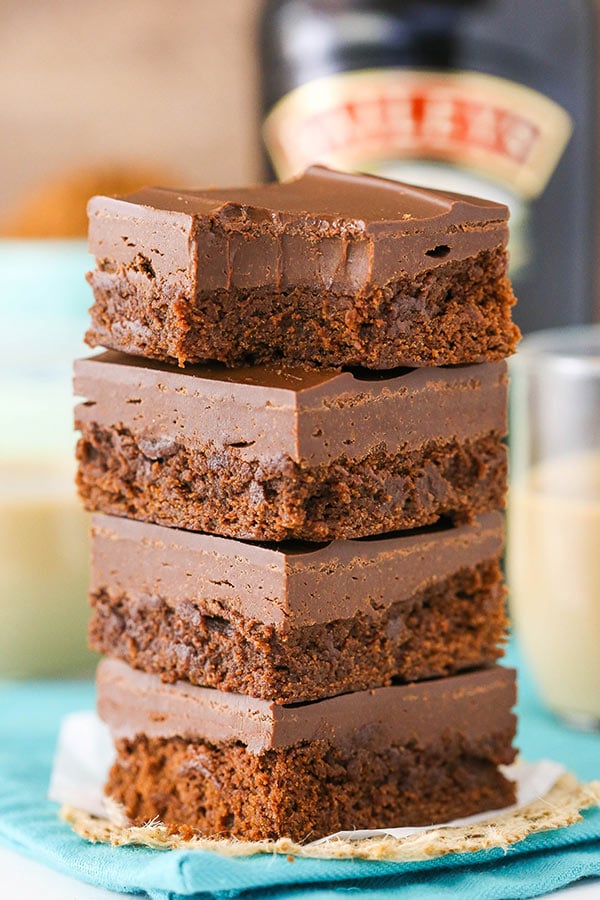 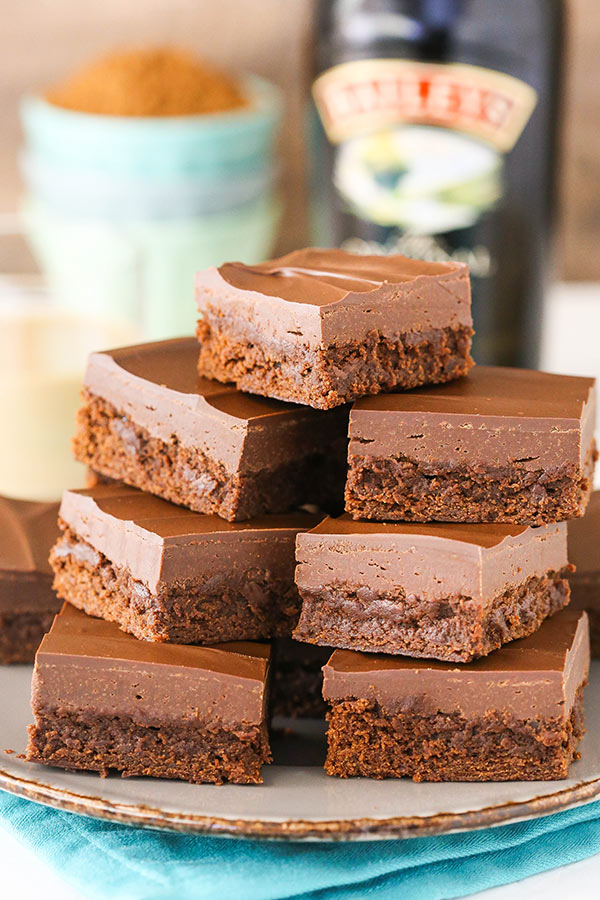 So can I tell you how spoiled our dog is without being judged? 😉 She is SO spoiled. In the best way. Every day this pup gets two walks, at least one bone, countless belly rubs and kisses, playtime chasing after toys and she even gets to sleep in the bed with us sometimes.

Lately she’s also been even more spoiled. She has a doggy bed that she loves! It’s big and comfy and she was always going upstairs by herself in the middle of the day to lay on it. The hubs and I tend to like her to hang with us, so we’d bring the bed downstairs during the day. That got kind of old so lately she has a new throne. 🙂

We have an ottoman that is just the right size for her that wasn’t being used. It is now Jessie’s “downstairs bed”. She is not allowed on the couch or any furniture other than our bed, so this was big and it took several weeks for her to understand that it was ok. And you guys – seriously, it is so cute. Now that she is elevated, any time she wants to see what I’m up to in the kitchen she can just pop her head up and watch me. She sits high enough that she can see over the couch into the kitchen. It’s really pretty funny.

We’ve been pretty lucky with her – she is the sweetest and even though she’s spoiled, she’s also well behaved. Since we’ve yet to have kids, she gets allllllll the love. 🙂 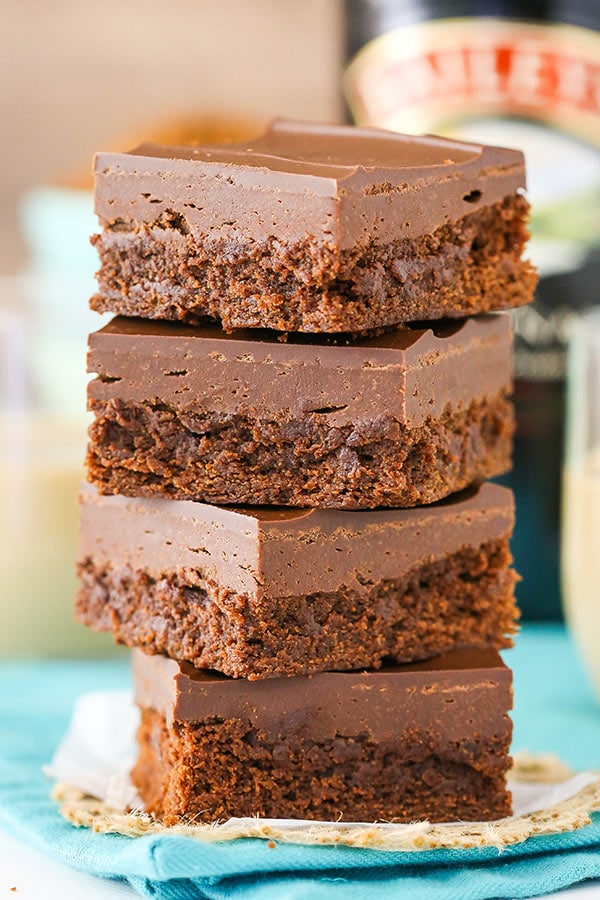 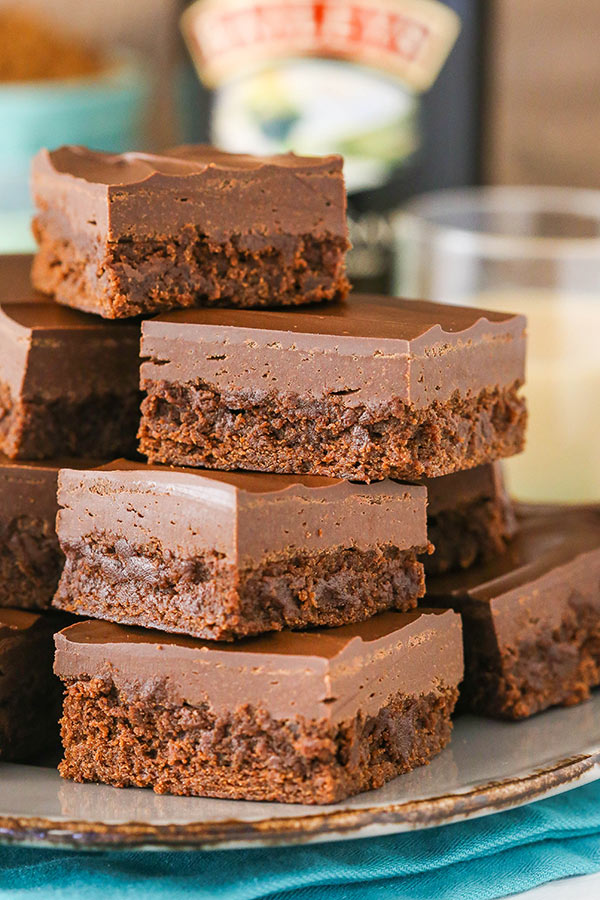 Similarly, these Baileys Fudge Brownies will get all of your love. They are ridiculously good! I’m not even kidding that they just melt right in your mouth.

How to Make Baileys Fudge Brownies

To start, we’ve got a Baileys brownie on the bottom. It’s nice and easy to put together – just the way I like it. Feel free to use a mixer, but I usually just use a whisk (check out the video just above the recipe). Combine the wet ingredients, then the dry ones, then add them all together and bake. D.O.N.E.

Next is the Baileys fudge. Also easy. It’s just a combination of sweetened condensed milk, chocolate chips, Baileys and a little vanilla. I played around with the amount of Baileys in the fudge a bit. I wanted to make sure you could taste it, but it wasn’t overpowering. I also wanted to make sure the fudge was a good fudgy-texture. Everything is melted over a double boiler, or pot of simmering water. You could use the microwave, but it’s quite easy over the stove and melts nice and smooth.

On top of the fudge is a thin chocolate topping. There’s a touch of shortening added to the chocolate just to keep it from being too firm on top. Then everything is refrigerated until firm and cut into bars.

These brownies were a BIG hit! The flavors are terrific and they melt right in your mouth! They don’t take too long to make and set either, so gratification comes quickly. 😉 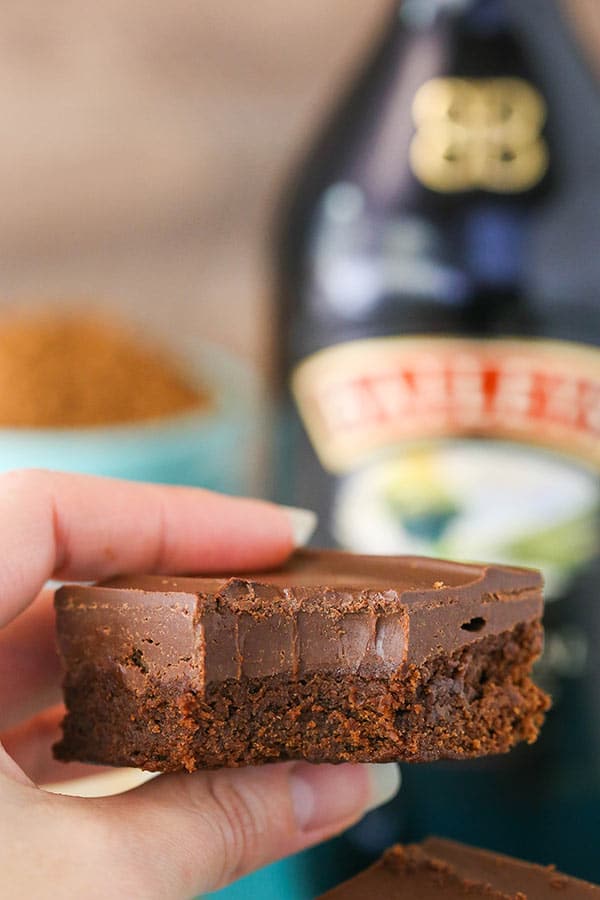 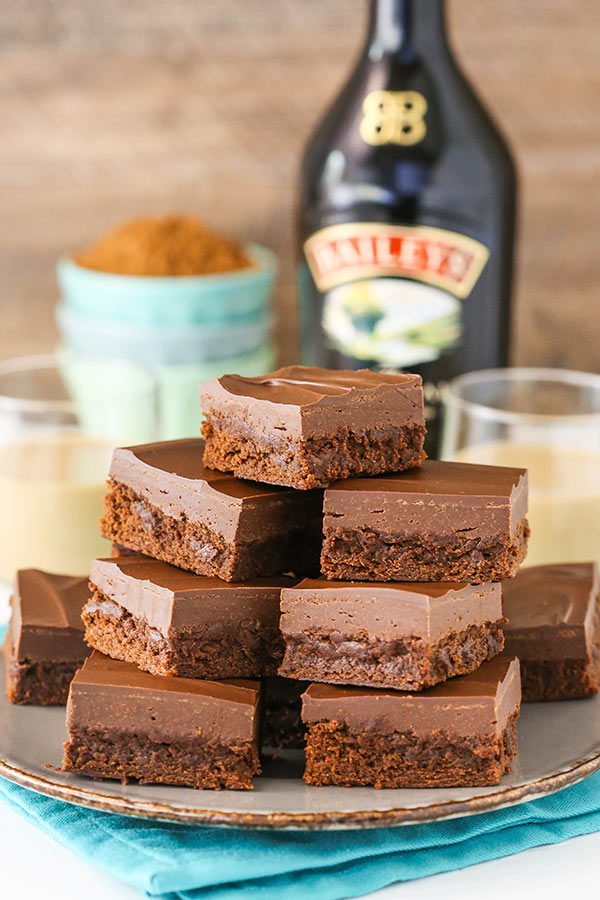 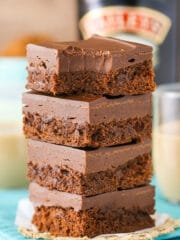 These Baileys Fudge Brownies are so dangerously good! Melt-in-your-mouth Baileys brownie on the bottom, Baileys fudge in the middle and chocolate on top. You’re Welcome!

1. Preheat oven to 350°F (176°C). Grease a 9×9 baking pan or line it with parchment paper or aluminum foil, which you can use to remove the brownies from the pan when they are done.
2. Combine the butter, sugar, vanilla extract and Baileys in a medium sized bowl.
3. Add the eggs and mix until well combined.
4. In another medium sized bowl, combine the flour, cocoa, baking powder and salt.
5. Add the dry ingredients to the egg mixture and mix until well combined.
6. Pour the batter into the prepared pan and spread evenly.
7. Bake for 18-20 minutes, or until a toothpick comes out with a few moist crumbs.

8. Combine sweetened condensed milk, chocolate chips, Baileys and vanilla extract in a metal or glass bowl. Set the bowl over a pot of simmering water.
9. Stir mixture until everything is melted and smooth, then spread evenly over the brownies.
10. For the topping, add the chocolate chips and shortening to a microwave safe bowl. Microwave in 15 second increments until the chocolate and shortening are melted and smooth.
11. Spread chocolate into an even layer over the fudge.
12. Set brownies in refrigerator to set, 4-5 hours
13. Cut brownies into bars. Store brownies in an airtight container in the refrigerator. Brownies are best for 3-4 days, but should be ok for up to 5-6 days. 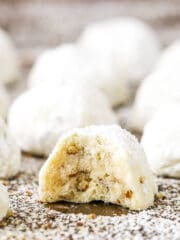 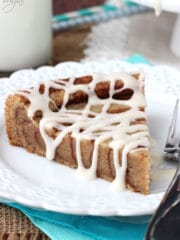 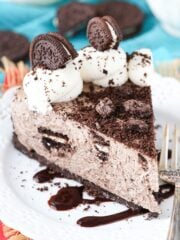