I hope everyone had a wonderful Thanksgiving yesterday! I know our day was full of family and food and lots of football and relaxation. I’m thankful for so many things, it’s hard to even name them all, but at the top of my list right now is my loving and supportive husband. He was especially supportive this week.

I’ve written a few times about our struggles with miscarriage and fertility (see my previous post Miscarriage and Trying to Conceive) and this week (Wednesday), we took our next step. I’ve said it before and I’ll keep saying – this stuff is not talked about enough. It’s hard stuff to go through it, so it’s not always easy for people to talk about it, but I’m hoping to have an open conversation on my blog as I go through the process and learn. I want to share it with you.

According to our doctor, the first three things that are checked when a couple has had trouble conceiving are 1. that you (the woman) are ovulating 2. that the man’s sperm are up to par 3. that your tubes are open and the uterus is not misshapen or anything that would be a problem.

Number one is pretty easy to figure out – if you use an ovulation kit and get a positive test for ovulation, you are ovulating. We’ve been using the Clearblue Advance Digital Ovulation test since April and fortunately I ovulate regularly and at the same time very month. My cycle is very regular.

Number two isn’t hard either. Collect the sperm, test it. The hubs got a solid result.

Number three is a little more involved and it’s called a hysterosalpingogram (HSG). Try saying that fast. I still can’t even pronounce it. Basically it’s an x-ray where they put an iodine-based dye through your uterus and fallopian tubes, watch what happens while taking x-rays and then are able to see if there’s anything wrong. The test has to be done between day 8 and day 11 of your cycle, because of the end of menstruation and because day 12 can be the beginning of ovulation.

On the way to the hospital Wednesday morning for the HSG, the hubs was pretty cute. He’d been worried about how everything would go and if it’d be painful for me or not, so he told me he’d googled. After reading up on it, he was pretty sure I’d be ok, but was still concerned. It was especially cute/funny because once I got into my room and the nurse came in, once of the first things she asked was if I’d googled and knew what to expect. I said, “No, but he did!” and pointed at him. 🙂 Rather than google though, I usually ask a good friend that went through it. First-hand info just seems better to me. I’m really thankful to be able to ask her and talk about it.

The procedure itself normally take about 10 minutes, but we got delayed. My doctor neglected to inform me of one detail. You aren’t supposed to have unprotected sex from the time your new cycle starts to when you have the procedure. Because of the radiation, they want to be 100% sure you aren’t pregnant. Maybe that should’ve occurred to me, but it didn’t. And since my doctor didn’t mention it, we were delayed by having to do a blood test. So keep that in mind if you ever have an HSG. 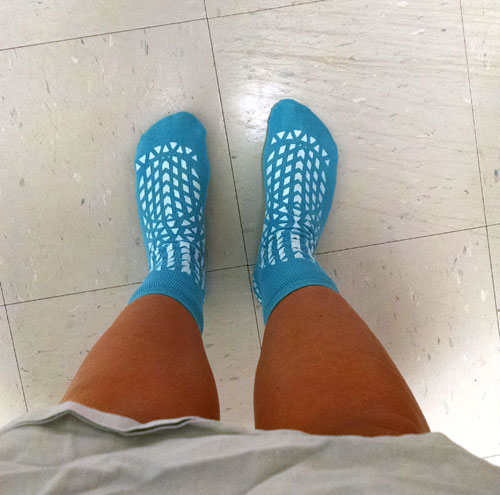 Once that was done, they did the procedure. The first thing they did was insert the duck bill (as I like to call it) and clean my cervix, which sounds awful but I couldn’t even really feel it. Then a catheter with a little balloon thing attached to the end of it was inserted. They blow that balloon up a bit and insert the dye. Then they watch and take pictures.

Pretty much immediately afterwards, I was shown the x-rays. I could see the dye going into the uterus and through the fallopian tubes, so everything was fine. I passed.

Some women experience pain with the procedure, some don’t. For me, while it was uncomfortable, it wasn’t much different from a yearly pap smear. It takes a little longer and the duck bill is lit up like a Christmas tree, but other than that, it was fine. I did have some cramping here and there afterwards though, kind of like period cramps. My doctor told me to take ibuprofen before the procedure, which I did, so it wasn’t bad. There can also be a risk of getting an infection afterwards from the dye I think, so I’m on an antibiotic just in case.

And that’s pretty much it. For me, it was pretty breezy.

One thing they told me at the beginning of everything is that apparently a number of people end up getting pregnant after the procedure. Often there is some blockage that is removed or something that is fixed after the test and it helps people get pregnant.

I’m going to level with you – I know multiple people who that wasn’t the case for and not one that it helped, so realistically I’m not expecting anything. I’ve been pregnant before, so theoretically my tubes were open and it made no difference. But we’ll see.

At this point, we know that all three things have been check off our list and everything is fine. I believe the next step, should we chose to take it, would be moving on to a fertility clinic and exploring our options with IUI (which I like to call the turkey baster) and IVF. At the moment, it seems we are going to wait a couple more months and see what happens before making the decision to do anything else. I know from others’ experience that it doesn’t get any easier and it only gets more expensive, so we aren’t going to make the decision to move forward lightly. For now, we wait.

And enjoy the holidays. Yay for Christmas! I’ll be 30 – crazy! And yes, my birthday is on Christmas Day. The actual day. 🙂