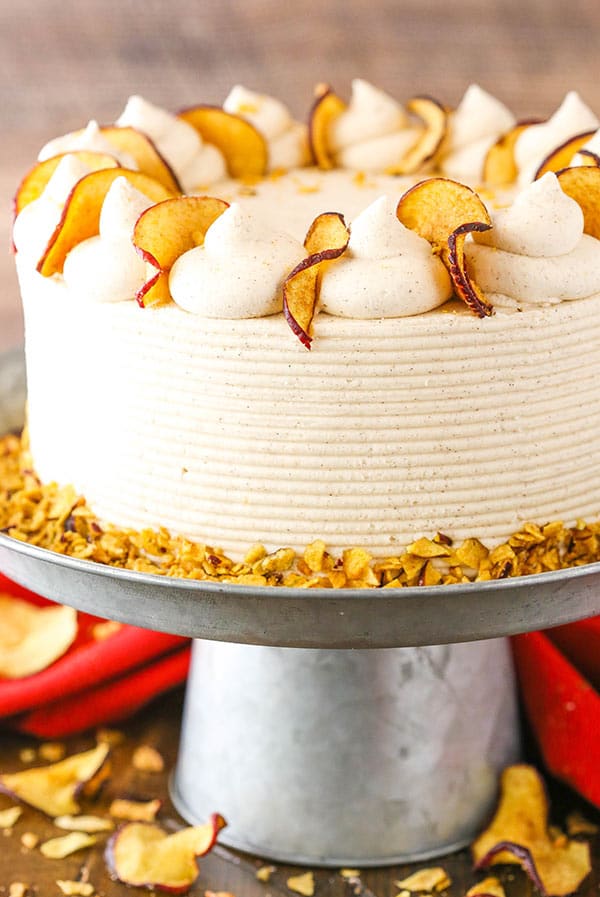 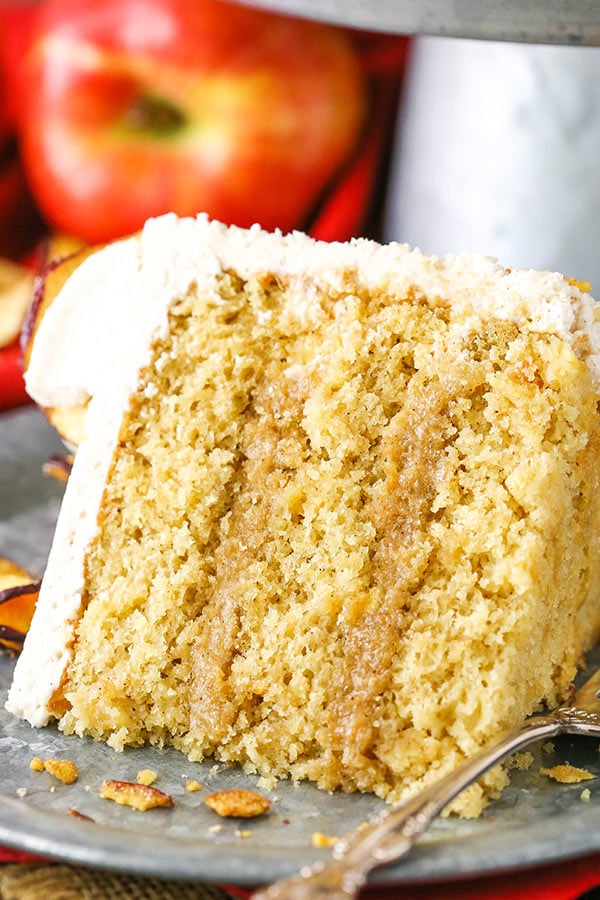 I can’t believe we are already well into October. This year has flown by! I’m trying to soak up the last of the good weather before it’s gone for the winter. One of our favorite things to do with the boys is go on walks, so I’m getting out with them as much as I can.

As sad as I’ll be to see the warm weather go, I’m always excited to enjoy fall flavors! Apples and cinnamon are certainly some of my favorites for fall. I pretty much get the biggest container of cinnamon I can every year and go through as much of it as I can. Cinnamon gives me life.

The combination of cinnamon and apples in this cake is amazing. The cake is so moist, it just about falls apart. It not only gets flavor from the cinnamon, but also from a mix of fresh chopped apples and applesauce. All the moisture from the apples adds wonderful flavor and so much moisture.

To get started with this Cinnamon Apple Layer Cake, you’ll make the cake layers. Combine the dry ingredients, including the cinnamon, and set those aside. Next up is creaming the butter and sugar together. I use Challenge Butter for my baked goods and highly recommend it. Their butter is made from fresh milk at family-owned dairies and goes from farm to fridge in just two days. It has no added hormones, artificial flavors or fillers, which I’m a big fan of. It’s such a great, creamy butter that goes perfectly in this cake. And life just got even better, because Challenge Butter is now available in Kroger, which is closer and more convenient than when I’d get it at Wal-Mart. Yay!

Add some brown sugar in with the butter and a little vegetable oil and cream them all together for several minutes. The brown sugar adds moisture to the cake, as well as flavor. The creaming process is an important one, as it adds air to the batter that helps the cake rise. 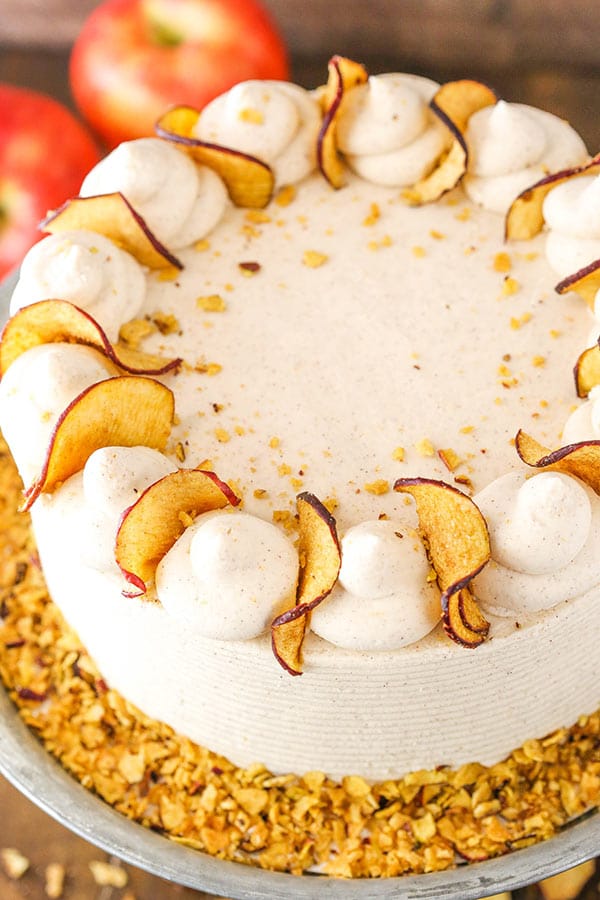 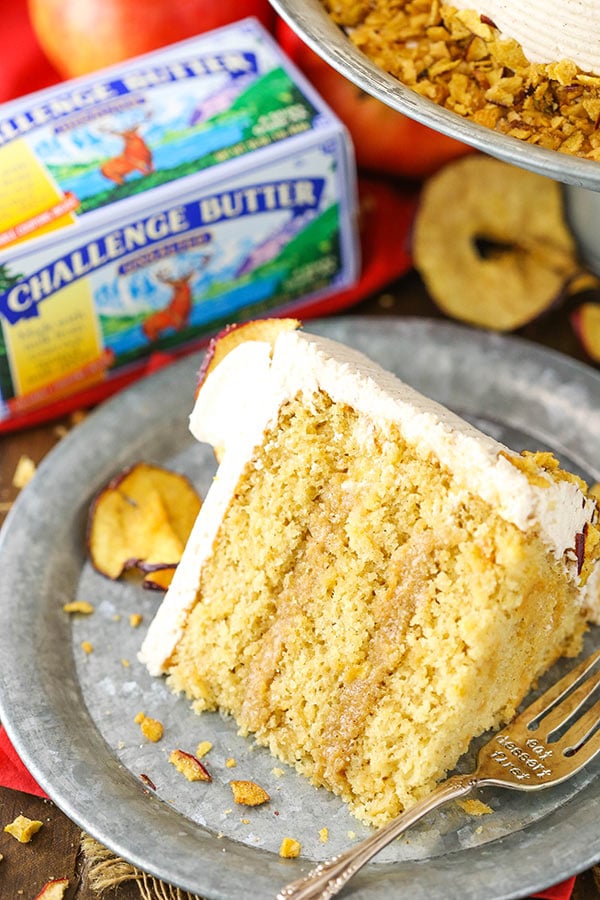 Next up are the eggs, which add flavor, structure and rise to the cake. Then some vanilla extract, apple sauce and milk, which also adds flavor and structure. Those wet ingredients are added alternatively with the dry ingredients to ensure that everything incorporates properly without over mixing the batter. Overtaxing the batter can over develop the gluten in the flour and you’ll end up with a tough cake.

The final step is to gently stir in the chopped apples, then bake the cakes.

Next up is the cinnamon apple filling, which I kind of want to add to everything now. It’s SO good! The flavor is so perfectly cinnamon and apple, it’s like eating fall right out of a pan. It’s also easy to make.

Toss the butter, brown sugar, cinnamon, apple sauce and cornstarch into a saucepan, heat it all together until the sugar has melted, then boil it for a few minutes. You want to be sure not to heat it on too high of a heat setting initially. The brown sugar can take it’s time in melting and you don’t want to rush it.

As for the applesauce in the filling, I decided to use applesauce instead of chopped apples because I didn’t want to have the texture of the whole cake radically changed by the addition of chunky bites of apple. I wanted things a little more cohesive. It was the perfect decision. The filling adds the perfect amount of apple flavor, without totally taking over the cake. I love it!

Once the filling has cooled, you’ll add a little powdered sugar to it to help thicken it up a bit.

This Cinnamon Apple Layer Cake is rounded out with a cinnamon-filled American buttercream. It’s the perfect final addition to the cake. Once frosted, I used my icing smoother and decorator to add some texture to the sides of the cake, then pressed some crushed cinnamon apple chips into the bottom. Add some swirls of frosting around the top edge and finish off the cake with some additional apple chips and it’s ready to go!

This is one of those cakes that I really wish I could give you a bite of through the screen. You just have to try it! Everyone who had it loved it. It’s so perfectly moist and full of flavor. It was generally agreed that you could eat it any time of day. Dessert, a snack – or even with your morning coffee. Shoot, you could eat it all day long. I promise I won’t tell. 😉 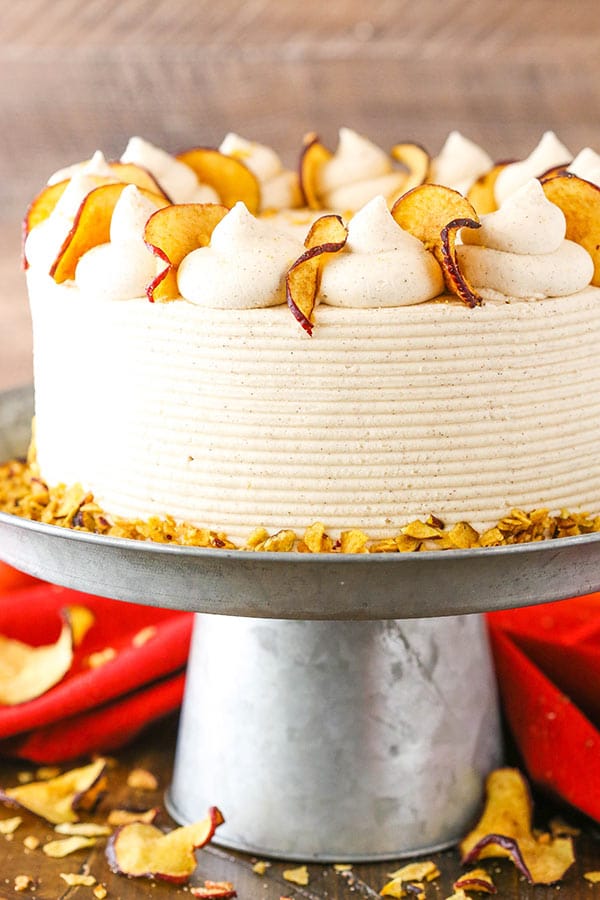 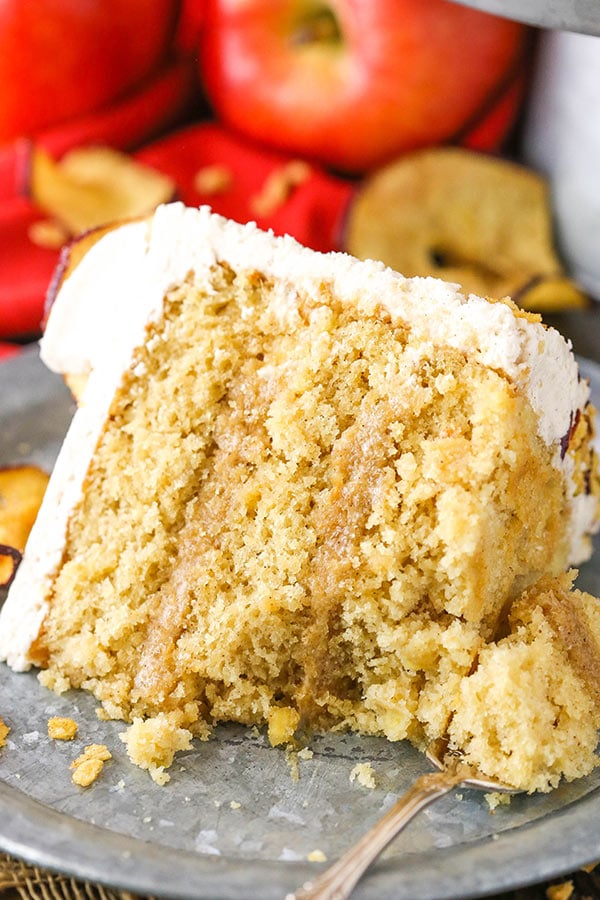 1. To make the cake layers, prepare three 8 inch cake pans with parchment paper circles in the bottom and grease the sides. Preheat oven to 350°F (176°C).
2. Combine the flour, baking powder, cinnamon and salt in a medium sized bowl and set aside.
3. Add the butter, brown sugar and vegetable oil to a large mixer bowl and beat together until light in color and fluffy, about 3-4 minutes. Do not skimp on the creaming time.
4. Add the eggs two at a time and mix until completely combined. Scrape down the sides of the bowl as needed to be sure all ingredients are well incorporated.
5. Add half of the dry ingredients to the batter and mix until combined.
6. Add the vanilla extract, milk and applesauce and mix until well combined. The batter will look a little curdled, but that’s ok.
7. Add the remaining dry ingredients and mix until well combined and smooth. Scrape down the sides of the bowl as needed to be sure all ingredients are well incorporated. Do not over mix the batter.
8. Fold the chopped apples into the batter.
9. Divide the batter evenly between the cakes pans and bake for 23-26 minutes, or until a toothpick comes out with a few crumbs.
10. Remove the cakes from the oven and allow to cool for about 2-3 minutes, then remove to cooling racks to cool completely.
11. While the cakes bake, make the filling. Melt the butter in a medium sized saucepan.
12. Add the brown sugar, apple sauce, cinnamon and cornstarch and whisk constantly over medium-low heat until sugar is dissolved.
13. Increase heat to medium and bring to a boil. Allow to boil for 3 minutes.
14. Remove from heat and allow to cool to room temperature.
15. Add the sifted powdered sugar and whisk until well combined and smooth.
16. When you’re ready to build the cake, make the frosting. Add the butter and shortening to a large mixer bowl and beat until smooth.
17. Add about half of the powdered sugar and mix until well combined and smooth.
18. Add the vanilla extract, cinnamon and 2 tablespoons of water or milk and mix until well combined.
19. Add the remaining powdered sugar and mix until well combined and smooth.
20. Add additional water or milk as needed to get the right consistency.
21. To put the cake together, trim the tops/domes off of each cake, if needed. Place the first layer of cake on a cake plate or cardboard cake circle. Do be gentle moving the cake layers around – they are very moist and tender. I often use a cake lifter to help with moving them.
22. Pipe a dam of frosting around the outer edge of the cake and fill it in with about half of the filling. Spread the filling and dam into an even layer.
23. Add the second layer of cake, then repeat another layer of dam and filling.
24. Add the final layer of cake on top and then add a thin crumb coat of frosting to the outside of the cake.
25. Frost the outside of the cake with the remainder of frosting. See my tutorial for frosting a smooth cake. 26. Use an icing smoother with a patterned edge to create the lines in the side of the cake.
27. Press the crushed up apple chips into the bottom of the cake.
28. Add some swirls of frosting around the top edge of the cake, then finish it off with apple chips.