These Chocolate Turtle Cupcakes are made with a moist chocolate cupcake topped with caramel pecan frosting, caramel drizzle and some pecan crumbles! The flavors are perfection. 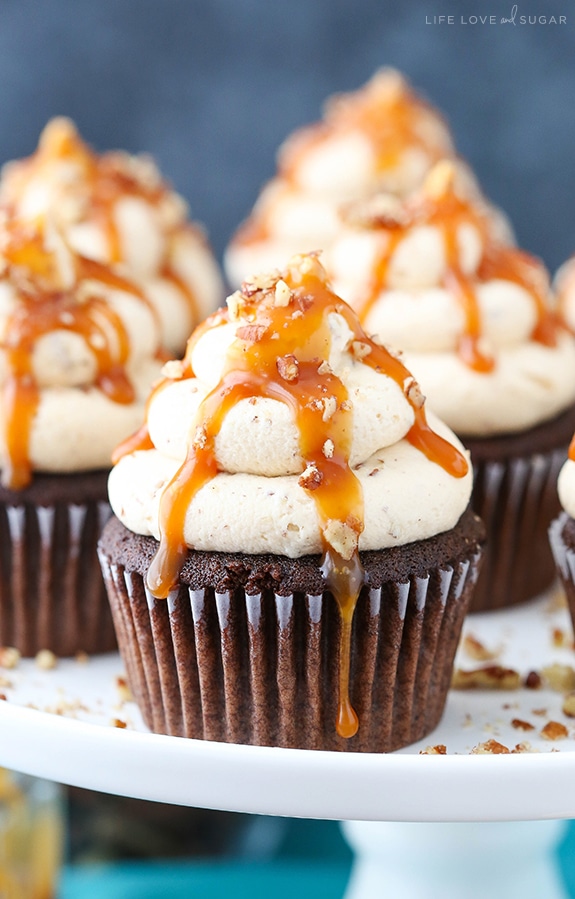 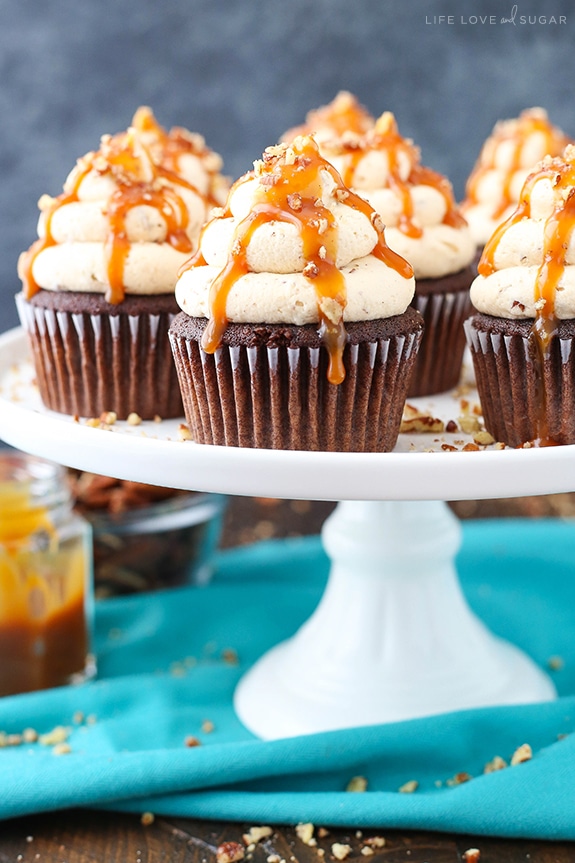 So this past Monday was The Bachelorette season finale. The hubs has been a big trooper this season and has watched quite a few episodes with me so he knew exactly what was going on as we sat down to watch the finale. He’s not quite as informed as I am on reading the very obvious editing that they do though. It’s pretty typical that they make it look like she’s picking one guy over another. You always know she’ll pick the opposite one. After the guys visited with her family, it was clear the editing was in favor of Robby so obviously Jordan would be the final choice.

But since the hubs doesn’t understand the editing game as well, he was not just shocked, he was completely convinced that she made the wrong choice. He was seriously so upset – even angry. It was hilarious. He was up and pacing around the room and telling me all the reasons girls always pick the wrong guy. I mean, he was so upset I had to pause the show to let him finish his rant. Hilarious! 🙂 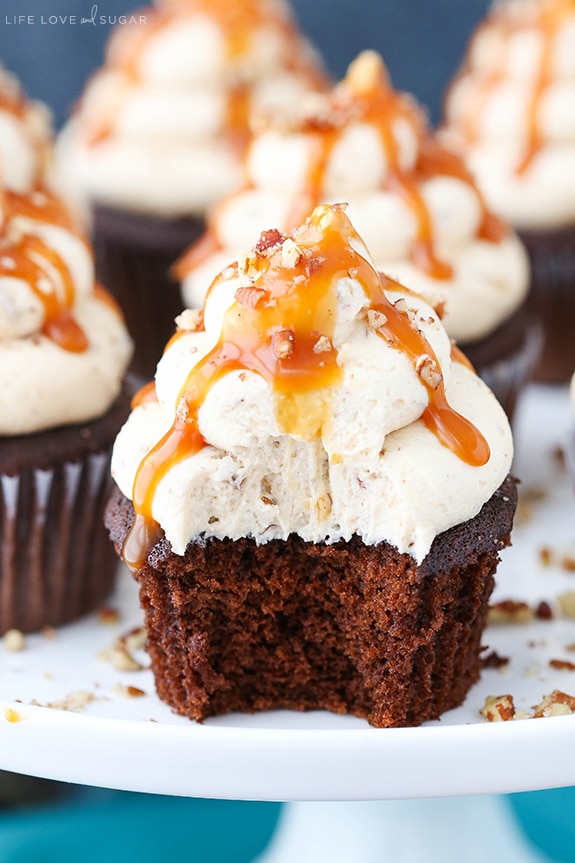 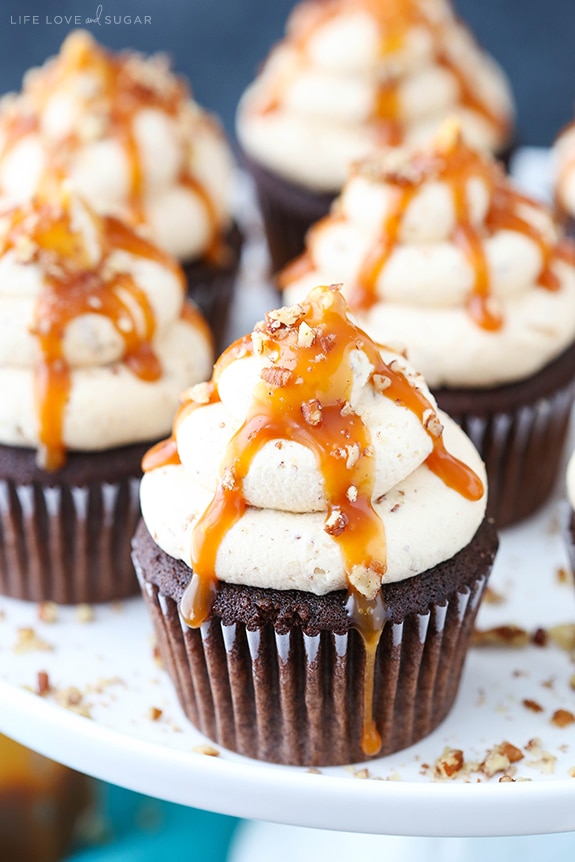 So along with sharing stories about our Bachelorette watching, I have cupcakes to share! These were declared a new favorite by co-workers – and they have tasted a lot of my recipes. That is saying a lot!

The chocolate cupcake is wonderfully moist and chocolatey. The frosting is flavored with caramel sauce and finely chopped pecans. The frosting – as simple as it seems – is totally amazing and makes the cupcake. I used my favorite homemade caramel sauce and it’s definitely the one I’d recommend. It’s got great caramel flavor that works perfectly. If you decide to use a different caramel sauce, you want to make sure it’s one that’s thicker at room temperature. If it’s too thin, you won’t be able to add much without thinning out the frosting too much and then you’ll either have too thin frosting or a frosting that isn’t caramel-y enough.

Because of the pecans in the frosting, I used a large round tip for piping. The pecans would likely get caught in a star tip, so to get a nice swirl a round tip will be best. Add a drizzle of caramel and a few pecan crumbs and you’re all set! You officially have one amazing cupcake to bite into! 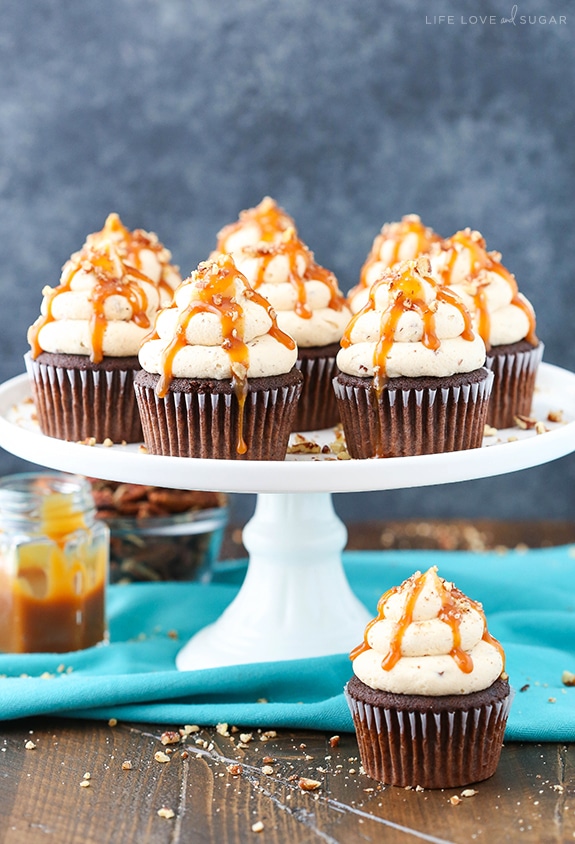 This is another of my posts over on The Cake Blog, so head over there for the full recipe. Enjoy!!

These Chocolate Turtle Cupcakes are made with a moist chocolate cupcake topped with caramel pecan frosting, caramel drizzle and some pecan crumbles! The flavors are perfection.

Find the full recipe and instructions on The Cake Blog. 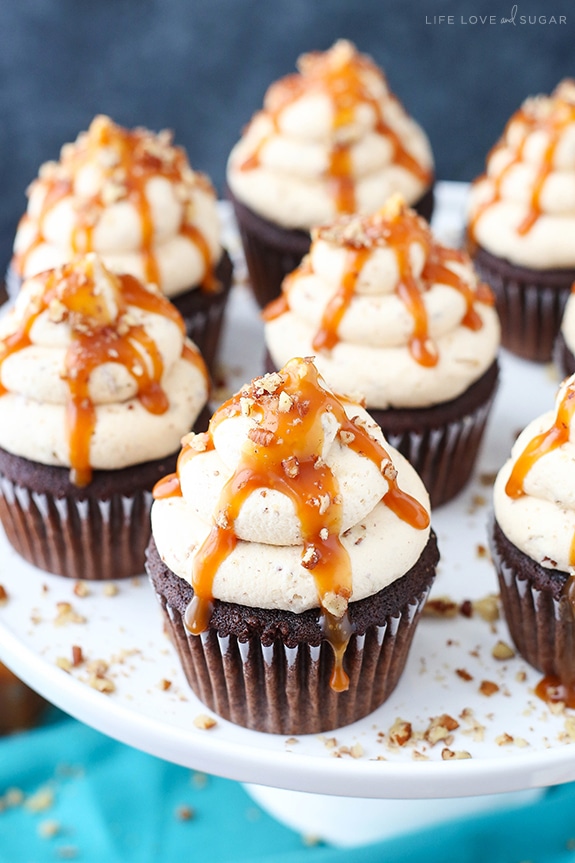