Time for an update! I’ve so appreciated all the well wishes from so many of you over the last several months. It’s been a busy pregnancy, as the boys have been growing and changing so much and have kept us really busy and on our toes. Things seem to finally be calming down a bit – just in time for our little girl to make her debut!

So I’m officially 36 weeks and closing in on my due date! It’s right around the corner and I think we are ready. We did the final touches on the nursery over the weekend and got things out of storage and cleaned and organized, etc.

All photos by Corey Johnson Photography. 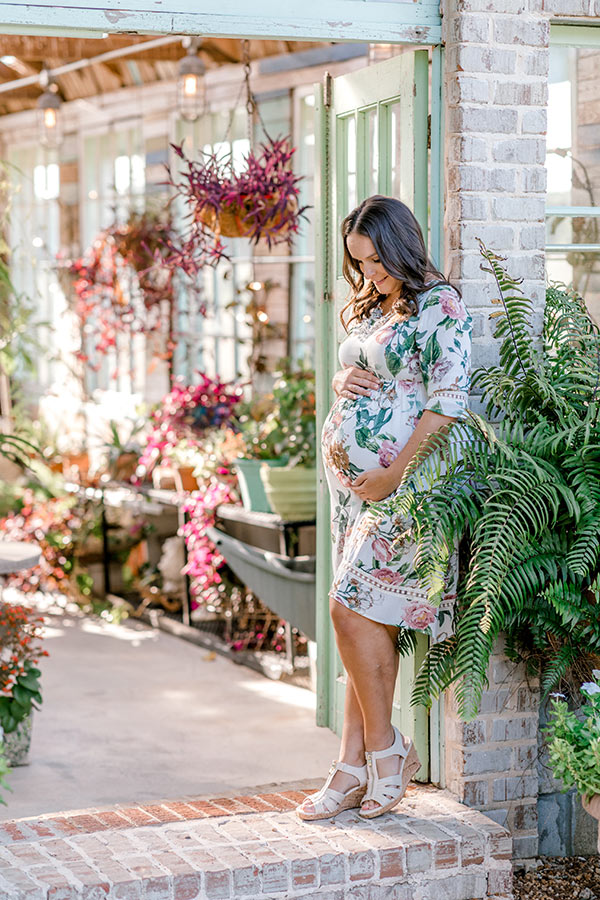 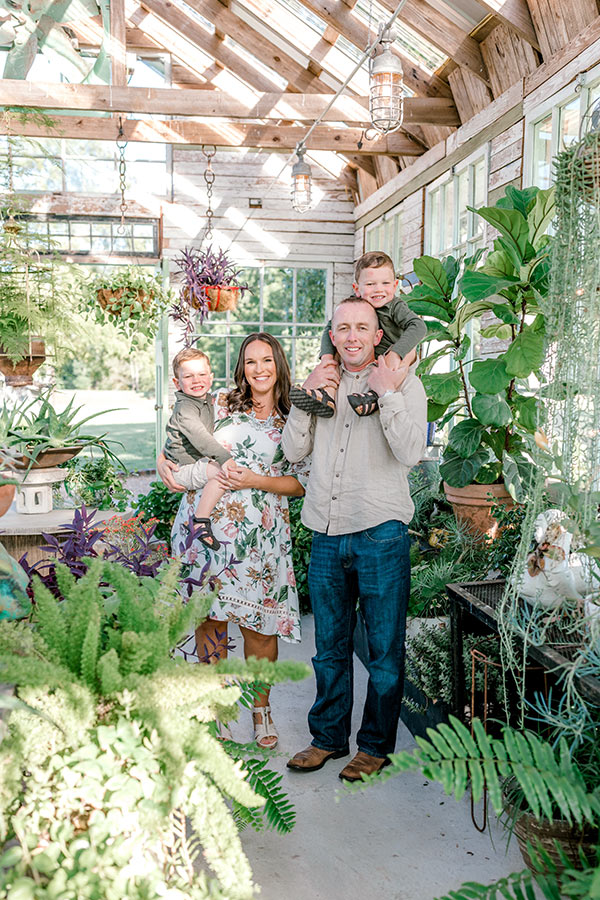 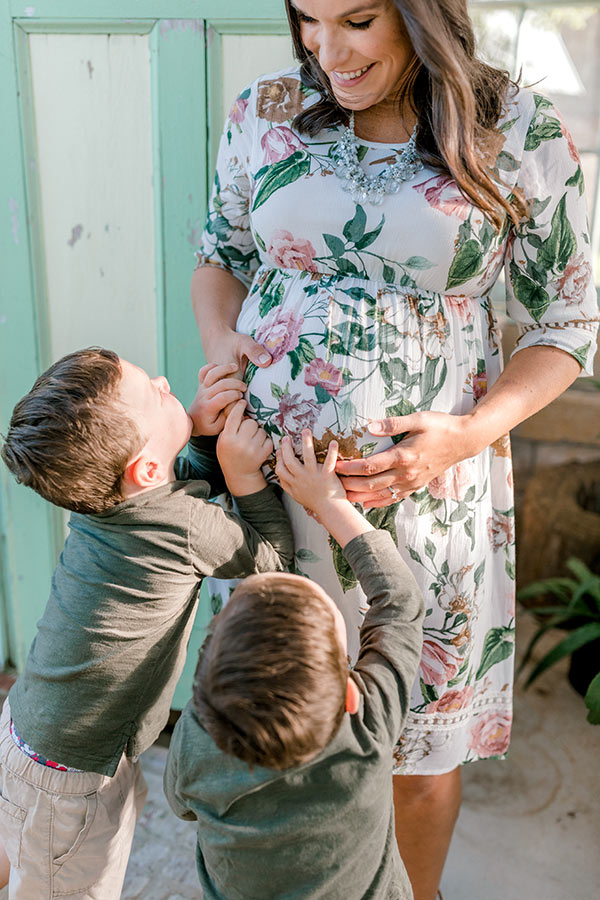 It’s hard to know just how much the boys understand about the fact that a baby is coming, but they will definitely tell you there’s a baby in my belly and we talk about it a lot. They know her name. They are into playing in her room and will even climb into her crib and lay there under a blanket we have in there. Overall I feel like they’re as aware as they can be for being 2 1/2.

So when I last shared about the pregnancy, I think I was just coming into the second trimester. The second trimester was quite good, really. Which is pretty normal. I felt pretty good, other than some heartburn. The biggest thing this whole pregnancy has really just been that it’s hard taking care of two high energy, crazy little boys while pregnant.

At this point, at 36 weeks a long, I’m feeling REALLY pregnant. Since about the last week, it’s been really quite hard to be on my feet, keeping up with the boys and doing everything I need to do for them. Just all the bending over at bath time is hard work.

But I’m trying really hard to push through it all and enjoy these last few weeks. Not only will I never be pregnant again (at least, that’s the plan), but I know that once she’s born, it’ll never be just us and the boys again. I’m trying to soak up the moments I have with them as much as I can.

One thing that has been so interesting for me with this pregnancy compared to the boys is how different the doctor’s appointments are. With the boys, because they were Mono-Di twins, we had constant appointments and ultrasounds all the time. At this point in time, we had two doctors appointments a week – one ultrasound and one NST.

With this pregnancy – I had an ultrasound at 20 weeks and not again. All my appointments since then have been like 5 minutes long and they just make sure her heartbeat sounds good, ask if I have any questions and send me on my way. I know that’s normal, but it’s just so different than my last pregnancy.

Want to hear a crazy fact? I was 35 weeks and 5 days when the boys were born, which would have been this past Friday. I’m officially farther along this time than I went with them. I had a c-section at that point because I had pretty severe preeclampsia. 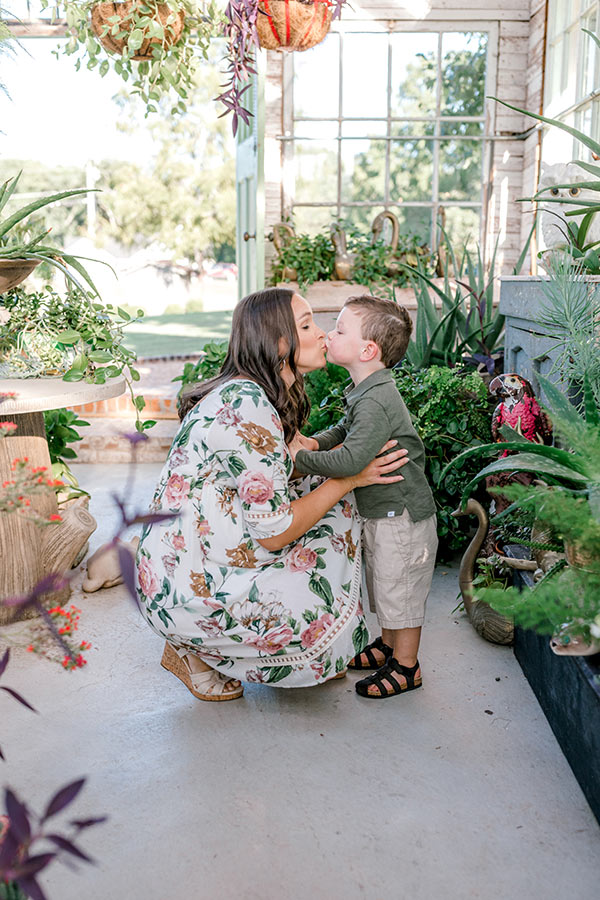 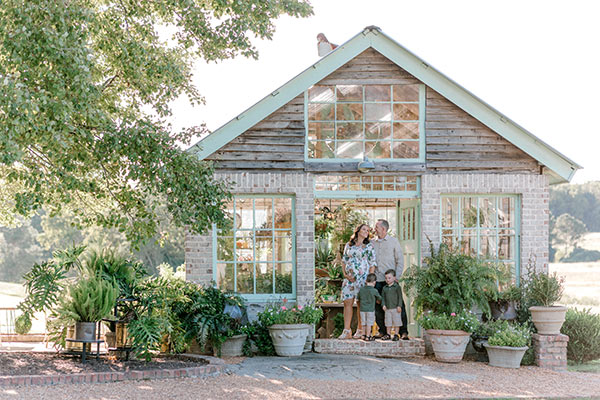 I am hoping to do a VBAC this time around. I’m told that because I had a c-section last time, I have to go into labor on my own in order to do a VBAC. They won’t induce me or anything. So fingers are crossed that I go into labor! Currently baby is head down, but kind of off to the right into my hip a little, rather than being directly down into my pelvis. The midwife I saw at my last appointment said that should be ok, but could mean a longer labor if she doesn’t shift prior to going into labor.

I’ve been having Braxton Hicks contractions for at least month or so, so I’m hoping that’s a good sign as far as going into labor and not having to have a c-section again.

The boys are busy

So going back to the fact that having two crazy boys while pregnant has been a challenge – they have been going through some real changes lately. I mentioned that we did potty training earlier this year. Ashton picked it up quite quickly and Brooks was much more stubborn about it, which is fitting with their personalities.

We finally got through that and then at the end of July they started climbing out of their cribs constantly. It was impossible to keep them in there and a constant battle. Brooks had climbed out so much, that the front of the crib literally started coming off. So we finally made the switch to toddler beds.

Boy has that been a doozie! My goodness. Talk about never staying in bed! And these kids climb, climb, climb. At first they were all about climbing in and out of their beds and running down the halls. Then that got old (and I put a cool little latch on the door) so they started pulling everything off of their shelves. Then I took everything off the shelves and they started going in their closet and pulling everything out and playing in there. Then I put a lock on the closet and they started climbing all over their rocker. Then the rocker fell back and scared Ashton and they still wouldn’t stop climbing on it still, so I pulled it out of their room. 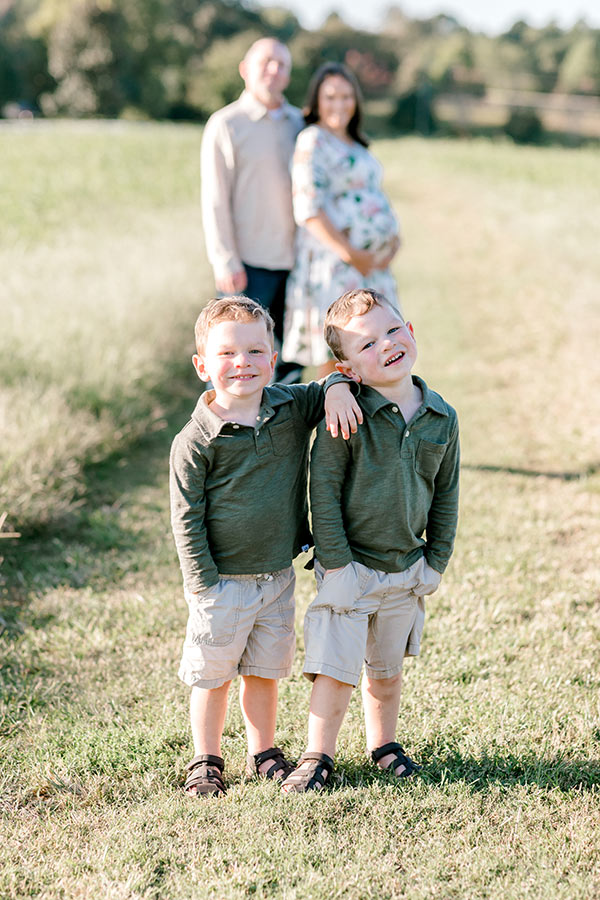 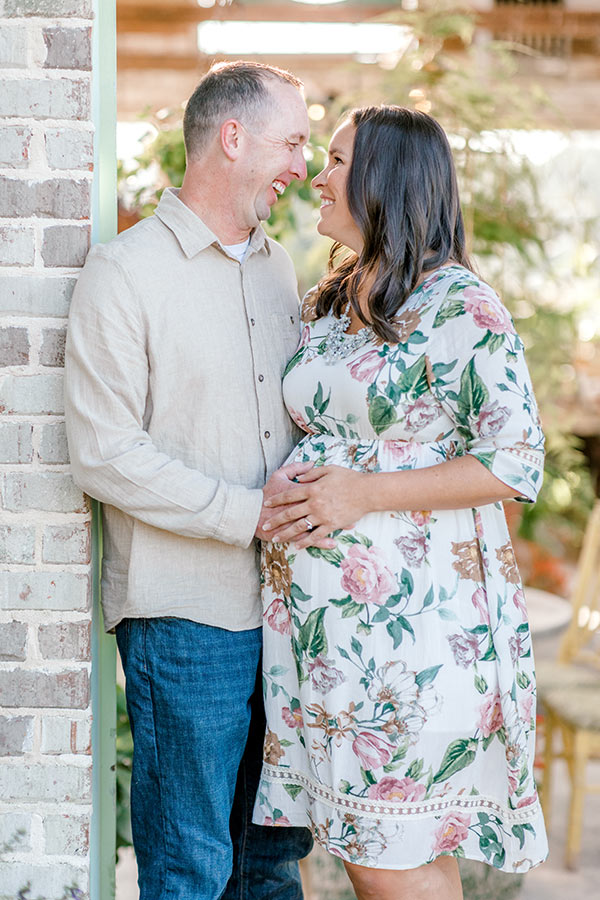 So now their shelves are empty, their closet door is locked, the rocker is gone and everything else seems to have lost it’s appeal. As of about the middle of last week, they finally just go to sleep at bedtime. It’s a dang miracle. They still have ways of dragging things out (don’t all toddlers?), but I’m not going up and down the stairs 6-8 times trying to keep them from hurting themselves or each other.

The other thing that became an issue once in toddler beds was waking up a lot in the middle of night and waking up super early – as in 5:30 am. Hello to my lack of sleep lately. So in an effort to help them fall asleep more easily at night and possibly sleep in later, we tried shortening their nap.

Well, shortly after doing that, they started waking up a bunch at night. Ashton was waking up and running out of the room as if he was scared. Bad dreams maybe? But it would be 4-5 times a night and lots of comforting – and he’d still get up at 5:30 am. They often wake the other up when one gets up, so it’s hard for anyone to get to sleep in. They’ve been better about that lately though.

Anyhow, we added a nightlight to the room, which didn’t really help, but Ashton did like having it. Finally, after about a month of being awake so much at night, we felt like maybe the boys were actually overtired. And since shortening their nap wasn’t lengthening their night sleep, we went back to letting them nap for longer. They are now napping longer than ever and finally sleeping better at night. Go figure? We can’t get them to sleep in any later, but at least a good nap helps them sleep more peacefully at night.

It’s seriously been nuts around here.

Additionally, they are getting super independent and really exerting that independence. Discipline is clearly necessary, yet a regular challenge. It’s all been quite exhausting. They are in a challenging stage, which is not really ideal given the addition of a newborn coming. It’s all been getting better over the last couple weeks, but man they are giving us a run for our money. 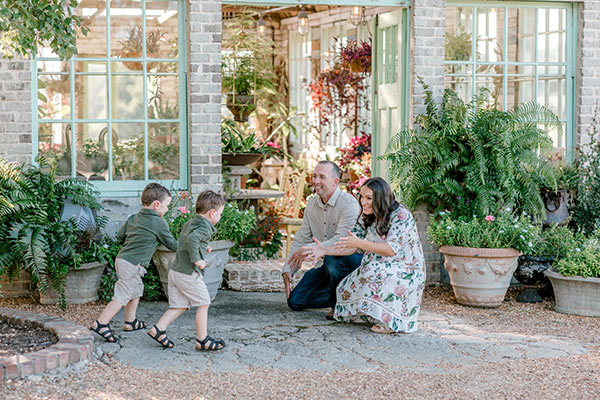 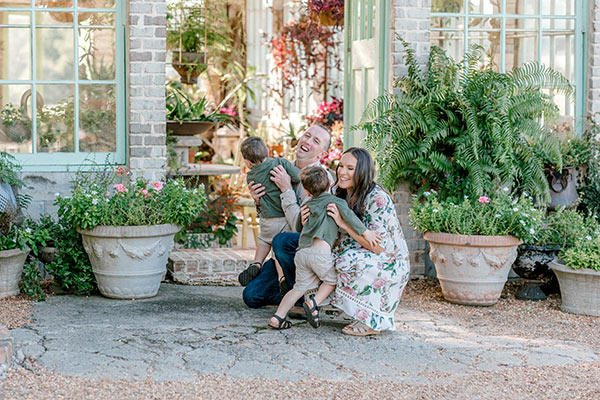 And even though they are sleeping better, my pregnancy insomnia is keeping me up several hours a night so exhaustion is for real.

All that said, they are very sweet, awesome boys and we love them like crazy. We really are trying to soak up all we can with them, while also trying to get a little better routine going given all the changes they’ve been going through recently so that when the baby gets here, it’s slightly less crazy than it could be.

So the final thing is baby girl’s name. We actually picked it long ago, back when we were about to start the IVF process and didn’t even know what was going to happen. One of my best friends had just been diagnosed with Acute Lymphoblastic Leukemia and I suggested to the hubs that we might name a little girl after my friend. My friend’s middle name is McKenzie and that will be our little girl’s name.

Since that diagnoses, my friend has been through lots of treatment – two bone marrow transplants and a stem cell transplant. The most recent one was back in February. Currently she is in her third remission.

As for the middle name, if you’ve been around this blog long enough then you know that our faith is very important to us. It’s also something that is very important to my friend and watching her walk through her treatment and how her faith has carried her through so beautifully is truly inspiring. So with all that in mind, a middle name that just came naturally was “Grace”.

So our sweet little girl will be named McKenzie Grace. We are so excited to meet her! 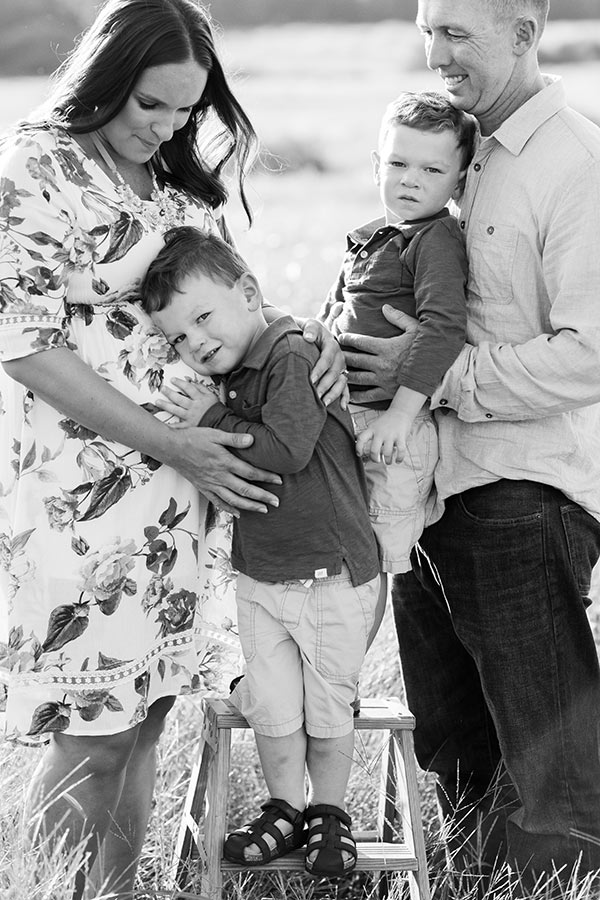 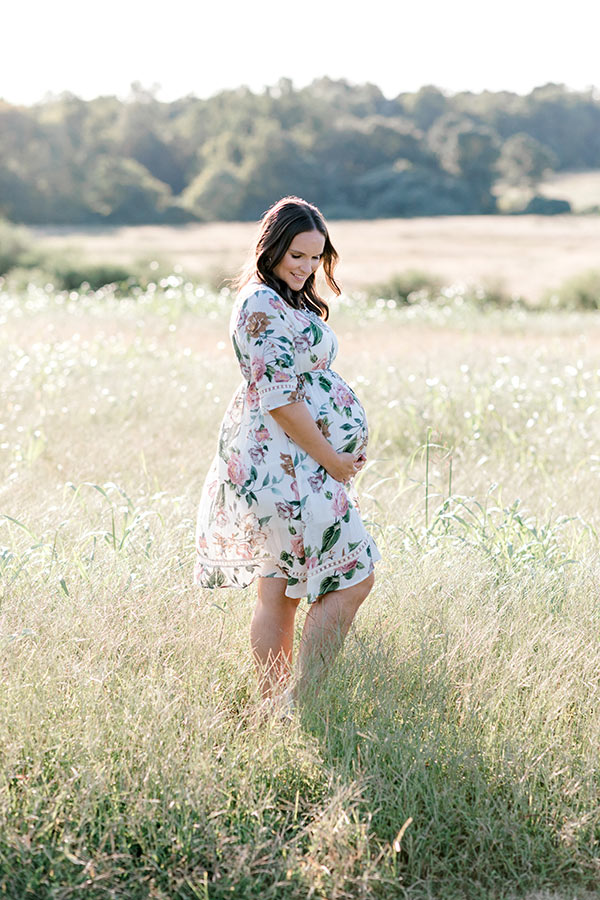 Our baby journey: The next steps and HSG