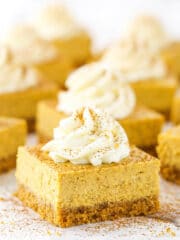 These Pumpkin Cheesecake Bars are the perfect easy way to enjoy pumpkin cheesecake without all the work! They are creamy, full of spice and topped with a cream cheese whipped cream!

1. Preheat oven to 325 degrees F and prepare a 9×9 inch pan with parchment paper that sticks up above the sides of the pan, so that you can remove the bars later for easy cutting.

2. To make the crust, combine the graham cracker crumbs, sugar, cinnamon and salt in a medium bowl. Add the melted butter and stir until the crumbs are well coated.

3. Press crust evenly into the bottom of the pan and bake for 6-7 minutes. When the crust is done baking, remove it from the oven and turn the temperature down to 300 degrees F.

4. To make the filling, beat the cream cheese, sugars and flour in a large mixer bowl on low speed until well combined and smooth. Be sure to use low speed to reduce the amount of air added to the batter. Scrape down the sides of the bowl.

6. Add the eggs one at a time, mixing on low speed to combine. Scrape down the sides of the bowl as needed to make sure everything is well combined.

7. Pour the batter into the pan with the crust and spread evenly.

8. Bake the bars for 35 minutes or until the center is mostly set.

9. Turn the oven off and leave the oven door closed. Leave the bars in the hot oven for another 10-15 minutes.

10. Remove the bars from the oven and allow to cool on the counter for about 30 minutes, then refrigerate until cold and firm.

11. Use the parchment paper to remove the bars from the pan and cut into bars.

12. To make the cream cheese whipped cream, add the cream cheese to a large mixer bowl and beat until smooth. Add the heavy whipping cream, powdered sugar and vanilla extract and whip on high speed until stiff peaks form.

13. Pipe the whipped cream onto the bars and dust with cinnamon, if desired.

14. Serve cold. Bars are best when stored well covered in the fridge and eaten within 4-5 days.