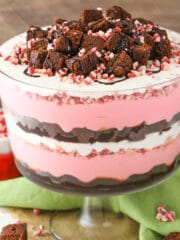 1. Preheat oven to 350°F (176°C). Grease a 9×13 inch (23×33 cm) baking pan.
2. To make the brownie, combine the butter, sugar and vanilla extract in a medium sized bowl.
3. Add eggs and mix until well combined.
4. Combine flour, cocoa, baking powder and salt in another medium sized bowl.
5. Add the dry ingredients to the egg mixture and mix until well combined.
6. Pour the batter into the prepared pan and spread evenly.
7. Bake for 24-27 minutes, or until a toothpick comes out with a few moist crumbs. Set aside to cool.
8. To make the cheesecake filling, add the cream cheese and sugar to a large mixer bowl and mix until well combined and smooth.
9. Add the milk, vanilla extract and peppermint extract and mix until well combined. Set aside.
10. In another bowl, add the heavy whipping cream and powdered sugar to make the whipped cream. Whisk on high speed until stiff peaks form.
11. Fold about 1/3 of the whipped cream into the cream cheese mixture until combined.
12. Add the remaining whipped cream to the cream cheese mixture and fold until combined.
13. Add some red gel icing color to the cheesecake filling to achieve your desired shade of pink/red.
14. To make the additional whipped cream for layering, add the heavy whipping cream, powdered sugar and vanilla extract to a large mixer bowl. Whisk on high speed until stiff peaks form.
15. To layer everything together, cut the brownie into small pieces. Add a little less than half of the brownie pieces to the bottom of the trifle dish.
Drizzle 1/4 cup of chocolate sauce over the brownies
16. Add half of the cheesecake filling in an even layer on top of the brownies.
17. Add about 1/2 cup of peppermint pieces in an even layer on top of the cheesecake filling.
18. Spread about half of the whipped cream into an even layer on top of the peppermint pieces.
19. Repeat another layer of brownies, chocolate sauce, cheesecake filling and peppermint pieces, then add a final layer of whipped cream.
20. Finish off the trifle with any remaining brownie pieces, some additional peppermint pieces and a drizzle of chocolate sauce.
21. Refrigerate trifle until ready to serve. I like to let it all set together for a few hours before serving. Trifle will last for 3-4 days when well covered in the fridge.