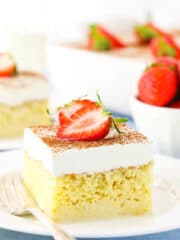 This Tres Leches Cake is a super light cake that’s soaked with a sweet mixture of three milks! It’s topped with whipped cream and a little cinnamon and is totally addicting! A classic Mexican dessert that you’ll want to make over and over!

1. Preheat oven to 350 degrees F. Lightly spray a 9×13 inch pan with non-stick cooking spray. I recommend a ceramic or glass pan, as the cake bakes and rises much better in that type of pan.
2. Combine the flour, baking powder, and salt in a large bowl. Set aside.
3. Separate the eggs into two separate bowls. Egg whites in one and egg yolks in another.
4. Add 3/4 cup (155g) sugar to the bowl with the egg yolks and mix on high speed until the yolks are pale yellow and have doubled in volume. When you lift the beater out of egg yolks, it should drizzle down in a thick ribbon.
5. Add the milk and vanilla extract and gently stir to combine.
6. Add the egg yolk mixture to the flour mixture and gently fold together just until combined. Don’t over mix.
7. Whip the egg whites on high speed until they reach soft peak stage, then gradually add the remaining 1/4 cup (52g) of sugar as you continue whipping. Whip until the egg whites reach stiff peaks, but aren’t dry.
8. Add the egg whites to the egg yolk mixture and gently fold to combine so that you don’t deflate the egg whites.
9. Pour the batter into the prepared pan and spread evenly so that it bakes evenly.
10. Bake for 25 to 30 minutes, or until the top is golden and a toothpick inserted in the center of the cake comes out clean. Remove from the oven and allow cake to cool completely.
11. Combine the evaporated milk, sweetened condensed milk, and whole milk in a medium bowl. Poke holes all over the top of the cake using a fork.
12. Pour the milk mixture over the the top of the cake, making sure to pour it all over the top and edges.
13. Refrigerate the cake for at least 1 hour or overnight to allow it to soak up the milks.
14. To make the topping, add the heavy whipping cream, powdered sugar and vanilla extract to a large mixer bowl. Whip on high speed until stiff peaks form.
15. Spread whipped topping evenly over the top of the cake. Garnish with cinnamon and fresh fruit, if desired.