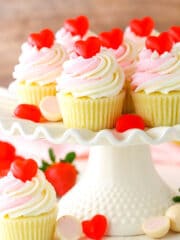 1. To make the strawberry truffle filling, put the white chocolate chips in a medium sized bowl.
2. Put the strawberry extract and heavy whipping cream in a microwave safe measuring cup or bowl and microwave until it begins to boil.
3. Pour the cream over the white chocolate chips and allow to sit for 2-3 minutes, then whisk until smooth. If needed, microwave the mixture for 10-20 more seconds, then whisk until smooth.
4. Add a very small amount of pink gel icing color and stir until combined. Add a small amount more, if needed, to get the right shade of pink. Keep in mind that once you whip this filling later, it’ll lighten a bit, so make it a touch darker than you’ll end up wanting it to be in the end.
5. Set the ganache in the fridge to firm up, about 2-3 hours.
6. To make the cupcakes, prepare a cupcake pan with cupcake liners and preheat the oven to 350°F (176°C).
7. Combine the flour, baking powder and salt in a medium sized bowl and set aside.
8. Add the butter, sugar and oil to a large mixer bowl and beat together until light in color and fluffy, about 2-3 minutes. Do not skimp on the creaming time.
9. Add the eggs one at a time, mixing until mostly combined after each. Add the vanilla extract with the second egg. Scrape down the sides of the bowl as needed to be sure all ingredients are well incorporated.
10. Add half of the dry ingredients to the batter and mix until mostly combined.
11. Slowly add the milk and mix until well combined. The batter might look a little curdled, but that’s ok.
12. Add the remaining dry ingredients and mix until well combined and smooth. Scrape down the sides of the bowl as needed to be sure all ingredients are well incorporated. Do not over mix the batter.
13. Fill the cupcake liners about 3/4 full and bake for 14-16 minutes or until a toothpick inserted into the center comes out clean.
14. Remove cupcakes from the oven and place on a cooling rack to cool.
15. While the cupcakes cool, finish the filling. Put the chilled mixture in the bowl of a mixer and whip with the whisk attachment until soft peaks form, about 5-7 minutes. You’ll notice the mixture lighten in color.
16. Cut out the centers of the cupcakes. You can use a cupcake corer or a knife.
17. Fill the centers of the cupcakes with the filling. Set the cupcakes in the fridge while you make the frosting.
18. To make the frosting. Place the white chocolate chips in a microwave safe bowl and heat in 10-20 second increments, stirring between each, until white chocolate is melted and smooth. Set aside to cool a bit.
19. In a large mixer bowl, beat the butter until smooth.
20. Add the cooled white chocolate in 2-3 batches and mix until well combined.
21. Add about half of the powdered sugar and 2 tablespoons of heavy cream and mix until well combined.
22. Add remaining powdered sugar and salt and mix until smooth.
23. Add remaining heavy cream as needed to get the right consistency of frosting.
24. Divide the frosting roughly in half. Add some pink gel icing color to one half of the frosting.
25. To frost the cupcakes with the colored swirl, I like to use three piping bags. I use two piping bags and add the white frosting to one and the pink frosting to the other. Then add your piping tip (I used Ateco tip 847) to the third large piping bag. Add the two frosting filled bags to the third bag side-by-side. It may seem a little tight and awkward, but it’ll mostly fit. When you squeeze from the top of the third bag to pipe the frosting, the two colors should come out evenly next to each other to create the swirl. Frost the cupcakes with the buttercream, then top with a heart candy.
26. Refrigerate cupcakes in an air tight container until ready to serve. Serve at room temperature. Cupcakes are best for 2-3 days.