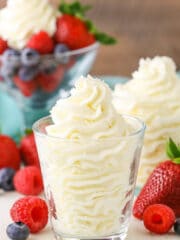 This Stabilized Mascarpone Whipped Cream is my favorite homemade whipped cream recipe! It’s perfect for frosting cakes and cupcakes, topping pies, eating with fruit – or even just by the spoonful!

1. Add the heavy whipping cream, powdered sugar and vanilla extract to a large mixer bowl and whip on high speed until soft peaks form. If making the chocolate version, also add the cocoa.
2. Add the mascarpone cheese to the whipped cream and whip until stiff peaks form. It will happen fairly quickly.

The mascarpone whipped cream will stay stable in the fridge for several days, even for a week, though it won’t remain as fresh. If you are going to use it to frosting something, I would suggest using it right away so that it maintains its texture well. Once it’s piped or spread, etc, it’ll stay put and nice and fluffy.

*I prefer to use the mascarpone cheese when still chilled, but soft, so that it’ll in corporate well, without chunks. The warmer mascarpone cheese is, the more likely it is to soften to the point that it won’t firm up well again and can make too soft of a frosting. I like to take it out of the fridge about 15 minutes before using so that it softens a bit, but is still cool.

You can leave out the powdered sugar (or reduce it) and still have stable whipped cream, since the mascarpone also helps to stabilize the whipped cream. The flavor is fairly different though (not sweet) without the sugar.