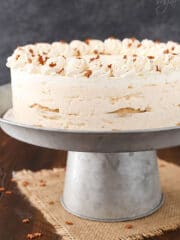 This No Bake Eggnog Icebox Cake has layers of a light and airy eggnog mousse, classic shortbread and whipped cream. It’s easy to make and perfect for the holidays!

1. Add eggnog and cornstarch to a sauce pan and heat on medium-high until eggnog is hot and just starting to simmer around the edges. Do not boil.
2. Sprinkle gelatin over eggnog and turn heat to low. Whisk gelatin into eggnog until smooth, then remove from heat and set aside to cool. (I put it into another bowl and then in the fridge to speed cooling – about 4-5 minutes)
3. In another bowl, beat cream cheese, sugar and nutmeg until smooth.
4. Add eggnog mixture to cream cheese mixture and mix until well combined.
5. In another bowl, whip heavy whipping cream for mousse until it starts to thicken.
6. Add powdered sugar and whip until stiff peaks form.
7. Carefully fold whipped cream into eggnog mixture.
8. Prepare a 9-inch springform pan by lining the sides with parchment paper that sticks about an inch above the sides of the pan.
9. In a small bowl, combine additional eggnog and milk.
10. Make a single layer of shortbread in the bottom of the pan. As you add the shortbread to the pan, dip each cookie into the eggnog and milk mixture and hold it there for 3-4 seconds.
11. Top the shortbread with half of the eggnog mixture.
12. Repeat steps 10 and 11, then make whipped cream for the top. Whip heavy whipping cream until it starts to thicken.
13. Add powdered sugar and whip until stiff peaks form.
14. Set about 1/3 cup of whipped cream aside for piping on the edges of the cake, then spread the rest into an even layer on top of the cake.
15. Place cake in the fridge for 5-6 hours to firm, or set in the freezer. I prefer to freeze it first to make it easier to remove from the pan, then leave it in the fridge.
16. Once cake has been removed from the pan, pipe remaining whipped cream around the edges.
17. Store cake in refrigerator until ready to serve.

Cake can be made ahead and frozen until ready to serve. Defrost cake in refrigerator before serving.