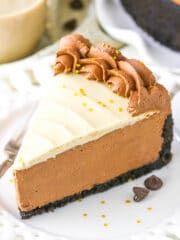 This No Bake Baileys Cheesecake is thick, creamy and FULL of Baileys flavor! It’s made with an Oreo crust, melted chocolate and ALL the Baileys Irish Cream! A delightful chocolate cheesecake recipe you simply must try.

1. In a medium sized bowl, combine the Oreo cookie crumbs and melted butter and stir well.
2. Press the mixture into the bottom and up the sides of a 9-inch springform pan. Set in the fridge to chill.
3. In a large mixer bowl, beat the cream cheese, sugar and cocoa until it’s well combined and smooth.
Add the Baileys and mix until well combined and smooth.
4. Add the melted chocolate and mix until well combined and smooth. Set aside.
5. In another large mixer bowl, add the heavy whipping cream, powdered sugar and vanilla extract. Whip on high speed until stiff peaks form.
6. Carefully fold the whipped cream into the cream cheese mixture in two parts until well combined.
7. Add the filling to the crust and spread into an even layer.
8. Refrigerate cheesecake until firm, 5-6 hours or overnight.
9. To finish off the cheesecake, remove it from the springform pan and set on a plate or serving platter.
10. To make the ganache, place the white chocolate chips in a medium heat proof bowl.
11. Combine the Baileys and heavy whipping cream in a glass measuring cup and heat in the microwave just until it begins to boil.
12. Pour the hot liquid over the white chocolate chips and allow to sit for 2-3 minutes, then whisk until smooth. If not completely melted and smooth, heat in 10 second increments, stirring between each until fully melted.
13. Allow the ganache to cool a bit (about 5 minutes, until thickened but still pourable and spreadable), then pour the ganache onto the top of the cheesecake and spread evenly. Use the tip of a 9 inch offset spatula to create a spiral pattern on top.
14. To make the whipped cream, add the heavy whipping cream, Baileys, cocoa and powdered sugar to a large mixer bowl. Whip on high speed until stiff peaks form.
15. Pipe the whipped cream onto the top of the cheesecake. I used Ateco tip 847.
16. Refrigerate until ready to serve. Cheesecake is best for 4-5 days.