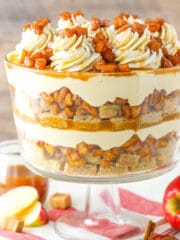 1. Preheat the oven to 350°F (176°C) and line a 9×13 pan with parchment paper or aluminum foil, with enough sticking over the sides that you can use it to remove the bars from the pan later.
2. To make the blondie base, melt the butter in a microwave safe bowl, then transfer to a mixing bowl.
3. Add the brown sugar and whisk to combine.
4. Add the vanilla extract and eggs and whisk until well combined.
5. In another bowl, combine the flour, baking powder, cinnamon and salt.
6. Add the dry ingredients to wet ingredients and mix until combined.
7. Spread the batter evenly into the prepared pan. Bake for 18-20 minutes, or until the edges are lightly browned.
8. Remove from the oven and allow to cool completely. Use the parchment paper to remove the blondie from the pan and cut it into pieces.
9. To make the apple filling, add the apples, brown sugar, cinnamon, nutmeg, lemon juice and water to a large sauce pan. Stir together until apples are well coated.
10. Cook apples on medium heat until at desired tenderness, about 15-20 minutes. Pour the apples into another bowl and set aside to cool to room temperature.
11. To make the cheesecake filling, add the cream cheese and brown sugar to a large mixer bowl and mix until well combined and smooth.
12. Add the vanilla extract and caramel sauce and mix until well combined. Set aside.
13. In another bowl, add the heavy whipping cream and powdered sugar to make the whipped cream. Whip on high speed until stiff peaks form.
14. Fold about 1/3 of the whipped cream into the cream cheese mixture until combined.
15. Add the remaining whipped cream to the cream cheese mixture and fold until combined. Set aside.
16. Add a little less than half of the blondie pieces to the bottom of the trifle dish.
17. Top the blondie layer with a little less than half of the cooked apples.
18. Add half of the cheesecake filling and spread into an even layer.
19. Add about half a cup of caramel sauce on top of the cheesecake filling.
20. Repeat another layer of blondie pieces, apples (reserving a little bit to decorate the top with) and the remaining cheesecake filling.
21. To make the whipped cream for the top of the trifle, add the heavy whipping cream, powdered sugar, cinnamon and vanilla extract to a large mixer bowl. Whip on high speed until stiff peaks form.
22. Pipe swirls of the whipped cream on top. Use remaining apples and additional caramel sauce to decorate the top of the trifle.
23. Refrigerate trifle until ready to serve. I like to let it all set together for a few hours before serving. Trifle is best when stored well covered in the fridge and eaten within 3-4 days.