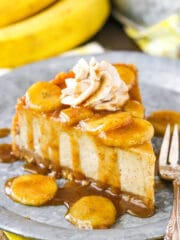 This Bananas Foster Cheesecake is made with a thick and creamy banana brown sugar filling, cinnamon cookie crumb crust and bananas foster topping!

1. Preheat oven to 325°F (163°C). Line a 9-inch springform pan with parchment paper in the bottom and grease the sides.
2. Combine the crust ingredients in a small bowl. Press the mixture into the bottom and up the sides of the springform pan.
3. Bake the crust for 10 minutes then remove from oven to cool.
4. Cover the outsides of the pan with aluminum foil so that water from the water bath cannot get in. See my tutorial for preventing a water bath from leaking. Set prepared pan aside.
5. Reduce oven temperature to 300°F (148°C).
6. In a large mixer bowl, blend the cream cheese, brown sugar and flour on low speed until completely combined and smooth. Be sure to use low speed to reduce the amount of air added to the batter, which can cause cracks. Scrape down the sides of the bowl.
7. Add the mashed bananas, cinnamon, nutmeg and dark rum. Beat on low speed until well combined.
8. Add eggs one at a time, beating slowly and scraping the sides of the bowl as needed.
9. Pour the cheesecake batter into the crust.
10. Place the springform pan inside another larger pan. Fill the outside pan with enough warm water to go about halfway up the sides of the springform pan. The water should not go above the top edge of the aluminum foil on the springform pan. Bake for 1 hour.
11. Turn off the oven and leave the cheesecake in oven with the door closed for 30 minutes. Do not open the door or you’ll release the heat.
12. Crack oven door and leave the cheesecake in the oven for another 30 minutes. This cooling process helps the cheesecake cool slowly to prevent cracks.
13. Remove the cheesecake from the oven from oven and let sit on the counter for 15 minutes.
14. Remove the pan from water bath and remove aluminum foil. Refrigerate cheesecake until completely cooled and firm, 6-7 hours.
15. When cheesecake has cooled, make the bananas foster. Melt the butter in a large pan over medium-high heat.
16. Add the brown sugar, nutmeg, cinnamon and heavy cream and stir until sugar is dissolved.
17. Pour the rum into the pan, then use a lighter to light the rum. Be careful, the flame can get somewhat high. Once lit, allow it to cook, swirling the pan a few times to disperse the rum and flames. It should burn out within a minute or two, but if not, swirl a little more to help it burn out.
18. Add the bananas to the sauce and continue cooking another 1-2 minutes to thicken the sauce. Remove from heat and set aside to cool and thicken before adding to the cheesecake.
19. While bananas foster cools, remove the cheesecake from the springform pan and set on a serving plate.
20. To make the whipped cream, add heavy whipping cream, powdered sugar and cinnamon to mixing bowl and whip until stiff peaks form.
21. Pipe a swirl border with the whipped cream around the outside edge of the cheesecake.
22. To finish off cheesecake, add the bananas foster on top, in the middle of the whipped cream. Drizzle the sauce over the bananas and down the sides of the cheesecake.
23. Refrigerate cheesecake until ready to serve. Cheesecake is best for 2-3 days because the bananas on top can spoil.