It’s no secret that I’m a fan of Oreo desserts. From Chocolate Oreo Cake to Oreo Cheesecake Brownie Trifle, there’s something for everyone. There’s even a No Bake Oreo Cheesecake! But while a no bake cheesecake can get close to the real thing, there’s just no substitute for an actual baked cheesecake. Rich, creamy and delicious!

So even though I’ve got just about all the Oreo dessert recipes you could want, I’ve got more and am sharing this Best Oreo Cheesecake with you today – and it’s SO good! The crust is Oreos, the filling has both Oreo crumbs and chopped Oreos, then it’s topped with even more Oreos! How could this not be amazing?!

How to Make Oreo Cheesecake

To get started with this Oreo Cheesecake, you’ll make the crust. I used my trusty Oreo Cookie Crust Recipe, which uses the full Oreo. No need to remove the cream filling – it all goes in there. So just combine the Oreo crumbs with some melted butter and press it into your springform pan. Then you’ll bake the crust for about 8 to 10 minutes and set it aside while you make the filling.

The filling is basically my Classic Cheesecake filling, but with a couple additions. It uses both Oreo crumbs and chopped Oreos, making this not just a vanilla cheesecake with some Oreos in it, but a true Oreo Cheesecake.

First, you’ll want to combine the cream cheese, sugar and flour and mix it all together until it’s well combined and smooth. Be sure to mix on a low speed, since using a high speed adds air to the batter. The air bubbles can rise to the top and create cracks in your finished cheesecake.

After that you’ll add your sour cream, which adds that classic cheesecake tang, and vanilla extract. Then the eggs are added one at a time, mixing until combined after each.

The final step to making the filling is to stir in the Oreo crumbs, which naturally add tasty flavor. 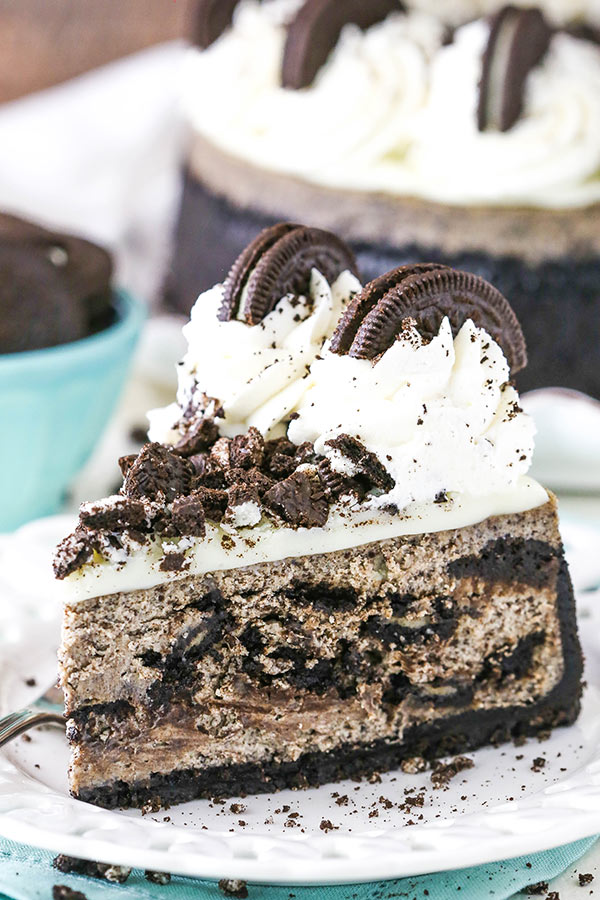 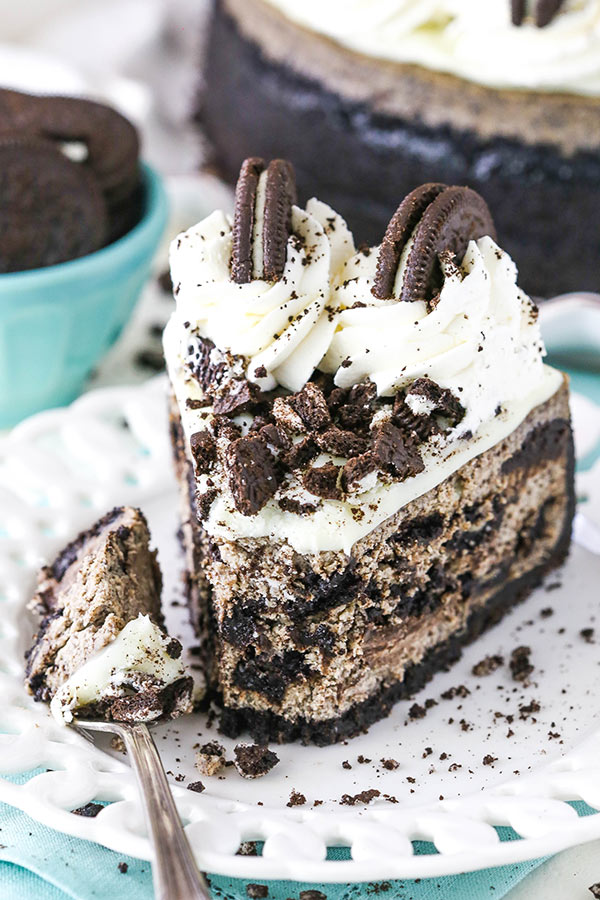 Why is this a Layered Oreo Cheesecake?

Because we want to avoid a cracked cheesecake, the chopped Oreos are layered into the filling. In addition to air bubbles creating cracks in cheesecakes, objects near the surface of a cheesecake while it bakes can also create cracks. So layering in the Oreos helps keep them from sitting on the surface of the cheesecake and hopefully avoids cracking.

How to Decorate an Oreo Cheesecake

Once your Oreo cheesecake is baked and cooled, it’s time to finish it off with a little decoration. While it shouldn’t get any large cracks if your Oreos stay put in their layers, it is possible (as you’ll notice in the video below). Fortunately if that does happen, this cheesecake is topped with a white chocolate ganache, which can conceal any issues. Not to mention that I LOVE the flavor it adds! It reminds me of the filling of the Oreo, which is clearly the best part.

Top the white chocolate ganache with some whipped cream swirls and more Oreos and you’ve got one delicious and pretty looking cheesecake! It’ll be sure to cure any craving for cheesecake and Oreos and will have you coming back for seconds and thirds! 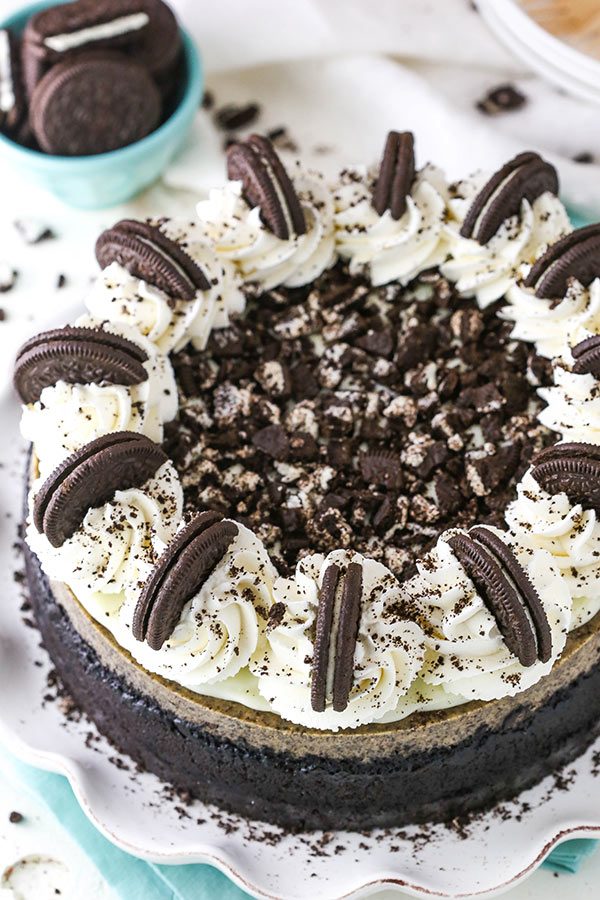 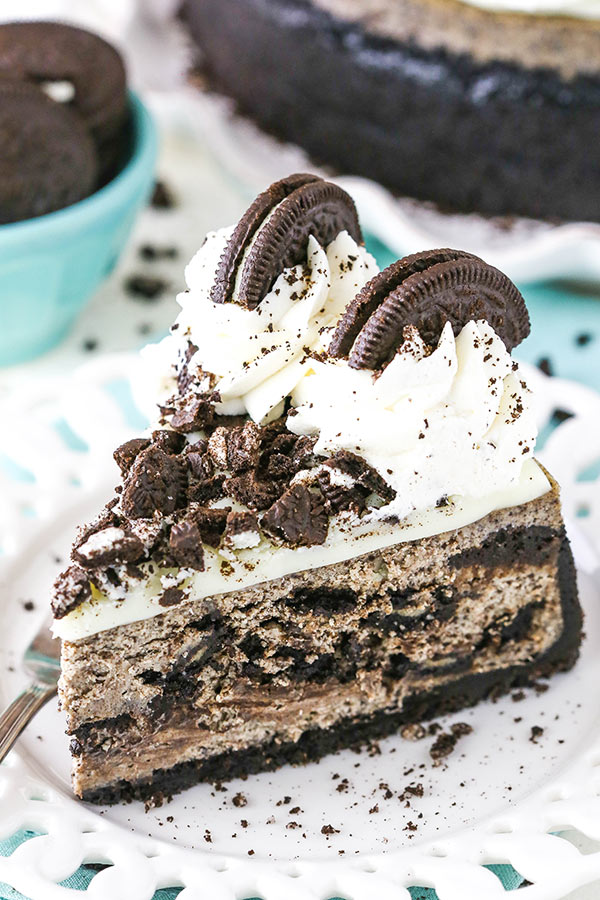 Tips for a Successful Oreo Cheesecake

1. Be sure to mix the ingredients together on low speed to reduce adding air to the batter, which can cause cracks.
2. Use a water bath to bake this cheesecake, which helps keep the cheesecake from browning too much, sinking in the middle after/while cooling and helps reduce cracking.
3. If any chopped Oreos float up a bit after layering them into the filling, using a toothpick to push them back down. If they are too close to the surface, they can cause cracking.
4. Having your cream cheese and eggs at room temperature helps them to smooth out and incorporate more easily, reducing the mixing time and keeping your filling from getting too much air incorporated.
5. Check out my ultimate cheesecake guide to a perfect cheesecake.

1. Reduce oven temperature to 300°F (148°C).
2. In a large bowl, beat the cream cheese, sugar and flour on low speed until well completely combined and smooth. Be sure to use low speed to reduce the amount of air added to the batter, which can cause cracks. Scrape down the sides of the bowl.
3. Add the sour cream and vanilla extract and mix on low speed until well combined.
4. Add the eggs one at a time, mixing slowly to combine after each addition. Scrape down the sides of the bowl as needed to make sure everything is well combined.
Gently stir the Oreo crumbs into the filling.
5. Pour a third of the cheesecake filling into the crust and spread evenly. Top it with half of the quartered Oreos.
6. Add another third of the cheesecake filling and spread evenly, then the other half of the Oreos.
7. Top the cheesecake with the remaining filling and spread into an even layer. It should be a thick enough layer to keep the Oreos from floating to the top. Try not to jostle the cheesecake around too much, or the Oreos will come to the surface. You want to avoid that so that you don’t end up with cracks in the top of your cheesecake. If some Oreos or air bubbles surface, use a toothpick to push down the Oreos and pop the bubbles.
8. Place the springform pan inside another larger pan. Fill the outside pan with enough warm water to go about halfway up the sides of the springform pan. The water should not go above the top edge of the aluminum foil on the springform pan.
9. Bake for 1 hour 20 minutes. The center should be set, but still jiggly.
10. Turn off the oven and leave the door closed for 30 minutes. The cheesecake will continue to cook, but slowly begin to cool as well.
11. Crack the door of the oven for 30 minutes to allow the cheesecake to continue to cool slowly. This process helps prevent cracking.
12. Remove the cheesecake from the oven and water bath wrapping and refrigerate until firm, 5-6 hours or overnight.
13. Remove the cheesecake from the springform pan and place on a serving dish.
14. To make the ganache, place the white chocolate chips in a medium heat proof bowl.
15. Heat the heavy cream just until it begins to boil.
16. Pour the hot cream over the white chocolate chips and allow to sit for 2-3 minutes, then whisk until smooth. If not completely melted and smooth, heat in 10 second increments, stirring between each until fully melted.
17. Allow the ganache to cool a bit (about 5 minutes, until thickened but still pourable and spreadable), then pour the ganache onto the top of the cheesecake and spread evenly.
18. To make the whipped cream, add the heavy whipping cream and powdered sugar to a large mixer bowl. Whip on high speed until stiff peaks form.
19. Pipe the whipped cream onto the top outer edge of the cheesecake. I used Ateco tip 844.
20. Finish the cheesecake off by adding additional chopped Oreos to the center of the cheesecake and an Oreo half to piped whipped cream swirls.
21. Refrigerate until ready to serve. Cheesecake is best for 4-5 days.